Parents Struggle To Save Bhargav From A Liver Disease That Took His Twin Brother's Life A Few Days Ago | Milaap
loans added to your basket
Total : 0
Pay Now

Shares
Shares
Share on whatsapp
Bhargav has an illness that has caused metal deposits in his liver. His twin brother Bhanu died of the same condition a few days ago, before his life could be saved by a liver transplant. Bhargav still has a chance of being saved if his parents can arrange for the procedure.

Bhargav is aware that his life is in danger

Bhargav is at an age where he knows what is happening around. He is aware that he is sick with the same illness that took his twin brother's life. He also knows that he will never again see his brother again.

The same cannot be said about his parents Pardhasarathy and Kanaka. They are devastated by their child's death. Bhargav's mother is still back in her village in Bhimavaram, Andhra Pradesh. If the doctors had not given dire warnings about Bhargav's condition they would not have come back to Hyderabad for his treatment.
Bhargav (left) with Bhanu

Bhargav is in Hyderabad with his father and grandfather. His liver has decompensated due to the same condition his brother had – Wilson's Disease. In this condition, excessive copper is deposited in a person's soft organs like the eye, liver etc. Like his brother, Bhargav's liver is destroyed. At any time, his condition can deteriorate badly.

“He thinks of his brother and cries. They were very close because they were twins. But Bhargav has always been the quiet one. He used to be happy to follow Bhanu around and agreed with whatever his brother said. He must be lonely,” Pardhasaradhi says.

Within two months of treatment, they lost Banu

Bhanu's treatment took a huge toll on the family. Bhanu needed a liver transplant and his mother was ready to donate part of her own liver to him. The family even moved to Hyderabad for treatment because they couldn't afford the travel. Unfortunately, in just two months – Bhanu's condition rapidly deteriorated and he passed away.

Pardhasaradhi is a daily-wage worker who earns just 300 rupees for a day's work. It has been a huge nightmare for his family to arrange the funds for treatment. He had somehow begged and borrowed from almost everyone he knew for Bhanu's treatment, but it wasn't enough. He had to take huge loans to arrange for the 12 Lakhs which was required for treatment. Unfortunately, they couldn't end up saving Bhanu's life. Though he doesn't have a choice, he is in no condition to go through the whole process all over again.

Pardhasaradhi feels trapped in a terrible situation that does not seems to end. He hopes that he is atleast able to save Bhargav before it is too late. His mother has come forward to donate a part of her liver to save his life. She was not able to do it for Bhanu and has the chance to donate for Bhargav now.

What you can do to help Bhargav

Bhargav's parents have exhausted all their money and need help to save Bhargav. With our support, he can undergo a liver transplant. His parents have lost a child already few days back and cannot bear to lose Bhargav now.
Funds raised through this fundraiser will help provide some relief for the devasted parents and also help save a life. 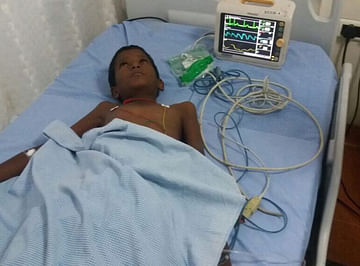