This 21-Year-Old Almost Fell To His Death From The Fourth Floor And Is Now Fighting To Live In The ICU | Milaap
loans added to your basket
Total : 0
Pay Now

“Just a day before his accident, I sent him a message saying I’d call him soon. I wish I had just made that call then. Now I might never get to talk to him again. My brother is now in the ICU, fighting for his life,” says Danish, Beigh's older brother.

Danish (23) received a devastating phone call on 9 January at 5 am telling him that his younger brother, Beigh (21), had accidentally slipped from the 4th floor of a building in Bangalore. Danish remembers it as the most helpless he has ever been. He rushed from Lucknow to Bangalore to find Beigh very critical in the ICU. He underwent a brain surgery soon after. Beigh's condition is improving, but he needs to stay in the ICU longer and get urgent medical care to live.

The unfortunate accident that nearly took his life

Beigh was studying for his last exam with his friend before the tragic incident occurred in his apartment building in Channasandra, Bangalore. He took a break from studying to throw out the trash on the terrace of the building and slipped and fell while crossing over to his side of the building.

“My brother was a distinction student throughout school and college. He worked very hard and was determined to make it big someday. Due to our financial condition, I was forced to stop studying after class 12 and start working as a security guard to help support my parents and younger siblings. I remember Beigh used to always tell me that he would soon get a job and help us all. It breaks my heart to see that he might not have a future now.”

Beigh before his accident

After Beigh’s near-fatal fall, he was rushed to the hospital by his friends. He had to undergo an immediate brain surgery due to severe blood clots in his brain. He was then shifted to the ICU and kept on ventilator support. He has been there ever since.


Beigh (left) with his friends

Shattered dreams and an uncertain future for Beigh without ICU care

After 6 long months of being away from home, Beigh was eagerly looking forward to meeting his family after his last exam. He was studying to be an engineer and had many plans for his future. He hoped that someday he would complete his MBA and get a good job to help support his family. Unfortunately, without further ICU care, Beigh’s dreams might never see the light of the day.
Beigh with his father and brother

“Beigh has been in a coma ever since the accident. There has been slight movement in his legs and there have been no more blood clots since his surgery. His condition is improving, but he needs to stay in the ICU longer. My parents are devastated by this news. We’re all waiting for him to wake up again, and be the cheerful and kind Beigh that we all knew. We want to hug him and tell him how much we love him.”

Beigh and his family come from a very humble background. They live in Baramulla, Jammu and Kashmir, where their father runs a small shop. Danish earns a salary of Rs. 8000 per month, with which they run the house. Their earnings are not enough to cover Beigh’s piling medical bills. He needs 9.5 lakhs to undergo further treatment. They have already used all their savings to pay 1 lakh for his treatment so far, but the estimated amount is beyond their reach.

Your support will ensure that Beigh lives to see a future and make his family proud. 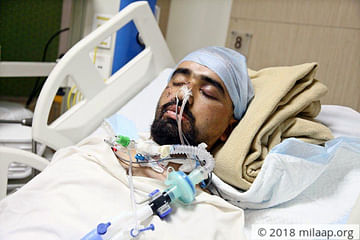 Beigh has been in the ICU ever since his accidental fall from the fourth floor. He needs help.