You are sending a message to
Subhankar Adhikary
Go back

Shares
Shares
Share on whatsapp
Subrata and Suchitra take their 3-year-old son for a walk in the corridors of the hospital. Little Rajvir’s face brightens when he sees other people. He makes an effort to run but the saline bottle connected to his wrist, moves, causing him pain. Suchitra is quick to stop him from running, he has just finished his chemotherapy session.
Rajvir has been under treatment for past 7 months. This young child is suffering from cancer. Rajvir’s only hope for recovering is a surgery. But it is a complex and expensive surgery and the family is out of funds to support his treatment.

Life took a downturn for the Subrata and his family last month when 3-yea- old Rajvir was diagnosed with Stage 4 Neuroblastoma (high risk) tumour, a type of cancer that starts in certain very early forms of nerve cells found in an embryo or foetus. This type of cancer occurs most often in infants and young children.

Subrata Adhikary and his wife, Suchitra Adhikary, live in a small town called Barasat in Kolkata, West Bengal along with Rajvir. For the last ten years, Subrata has been working as an IT executive in a Kolkata-based Chemical Research Organisation(CRO).  Subrata managed to take care of his family with what he earned. But the news of their little son’s condition disrupted their lives.

His condition was misdiagnosed and when they knew he had cancer, they had lost time

It was a usual day in the lives of Subrata and Suchitra. Rajvir was watching cartoons. Suddenly they heard him throw up. They were shocked to find that he had vomited blood.

“We rushed him to the hospital. Doctors told us that it was a case of gastric ulcer. For the next 6-7 months Rajvir underwent treatment for ulcers. We didn’t know that the diagnosis was wrong. We wasted previous time”.

When Rajvir started experiencing pain again, the parents decided to get a second opinion. A CT scan revealed the tumour which was slowly killing Rajvir. He was shifted to Tata Medical centre and the doctors started treatment immediately and recommended chemotherapy.
We cannot imagine the pain of the parents. They finally were getting their son back home, but the news of his cancer destroyed them

Rajvir will be required to undergo 8 cycles of chemotherapy every 10 days to reduce and possibly eliminate the tumour. He is in his 4th cycle now. Each session is taking a toll on him. But Rajvir never cries and is very cooperative.

“I think he got it from his mother. Even after knowing her son is dying, she never gives up. She smiles and tells us we will go home soon. Rajvir has the same positive attitude and it is surprising to see him remain calm during the chemotherapy”.

It is heart-wrenching to see Rajvir now. He has lost a lot of hair. Cancer has spread to the bone marrow as well.The little boy is in a lot of pain but there is a chance to save him.

Rajvir’s doctors have approached a hospital in Singapore for Rajvir’s treatment. After his 8 cycles of chemotherapy, he will need a surgery to remove the tumour completely, this should be followed by a stem cell transplant and maintenance therapy to ensure is cancer does not come back.

Subrata received a 3 lakh from his company insurance which he has spent for the chemotherapy sessions. The family is struggling to arrange funds for the next few cycles of chemotherapy and the funds for the surgery is far beyond their capacity. The total estimated cost will be over 50 lakhs.
The family is desperately trying to reach out to people they know as the time is running out but they have reached nowhere close to the target.

The family’s only hope to save their son is through generous contributions from people like us. Our support can save the life of this 3-year-old who has been suffering at such a young age.  Contributions raised through this fundraiser will go towards supporting Rajvir’s medical expenses for the surgery and corresponding therapies. Let’s join hands to help Rajvir stay alive.
Click here to make a contribution and save Rajvir 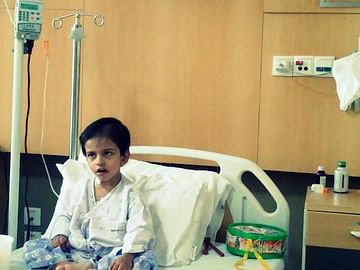 Your Support can help Baby Rajvir get treatment for Neuroblastoma Cancer