This 4-month-old Baby Will Not Survive Without Ventilator Support | Milaap
loans added to your basket
Total : 0
Pay Now

You are sending a message to
Sandhya
Go back

This 4-month-old Baby Will Not Survive Without Ventilator Support

Shares
Shares
Share on whatsapp
When Srinivasulu’s little bundle of joy arrived into this world he and his wife were very happy to hold the tiny tot in their hands. However, their happiness did not last even for few hours. She was diagnosed with a hole in her heart and they had to wait for 3 months to do the surgery.
4-month-old Baby in the Hospital
After 3 months, doctor said the hole had disappeared and heart was perfectly well. But this good news also did not last for long. It came with another heartbreaking ailment. This time, the 4 month old baby was diagnosed with Pulmonary Hypertension; she was constantly in chest pressure and pain and had shortness of breath.

"Doctors wring their hands but I did not give up. God should decide the fate of my child and not the doctors or even me"

They Never Gave up Hope Despite all the Odds

Lakshmi and her husband Srinivasulu were devastated to hear about the serious nature of the illness. Doctors said she could survive only for a year despite the surgery. But Srinivasulu refused to give up his hope and efforts. His relatives and well wishers asked him to abandon the child because they felt treatment was hopeless and it was just adding to their expenses and the trauma.
Lakshmi with her husband Srinivasulu and her baby

They wanted him to take care of his first son Jashvant instead of fighting a losing battle for a girl child. With the very meagre salary of 13,000 per month and as a sole breadwinner of the family; they thought he was being unrealistic.

He Raised 7 lakhs, Yet Not Enough for the Treatment

But, he was prepared to do everything even if it meant selling all that he has and to borrow enormously. He managed to borrow a huge amount of 7 lakhs yet his hospital bills are still unpaid.

“I pray to God everyday for my sister; I pray that my parents should come back soon and be with me”

7 year old Jashvant was building bond of love with his little sister before he even met her. He and his parents were waiting for her arrival and were happy that their family will be complete.  But now he is sad that he hardly spends time with his family. Jashvant is told that the little one has fever and they will be back to home when she is completely well.
Lakshmi's 4-month-old baby in the hospital

After months of struggle, she responded to the treatment surprising everyone

She was kept in ventilator for 15 days and she did not show any improvement. But later doctors were amazed to find that she was responding to the treatment. They remarked that she was a lucky child and it was definitely a miracle. Srinivasulu’s decision to fight odds instead of giving up was not in vain.

Require More Money to Keep the Baby in Ventilation

Now his baby is on ventilation and she’ll continue to be in support of ventilation until she is completely cured and that will again require money. Now that he has witnessed what hope and love can do, he is even more confident that his tiny girl will recover soon. But he has exhausted all means of support for his daughter. While repaying the amount borrowed is beyond his limits, to borrow again is unimaginable.

How You Can Help? 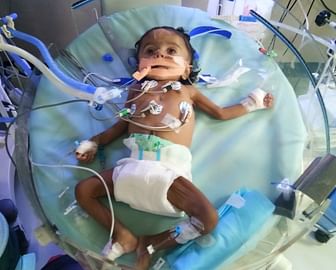 Our support will help the 4-month-old baby to live. Her parents are struggling to meet the expenses,