She Lost Her Husband And Elder Son, Our Support Can Help This Mother Save Her Only Son | Milaap
loans added to your basket
Total : 0
Pay Now

She Lost Her Husband And Elder Son, Our Support Can Help This Mother Save Her Only Son

Shares
Shares
Share on whatsapp
Sujata's life has been a never ending tragedy but not many of us will have the strength this mother has. She lost her husband when her second child, Mihir, was just 5 months old. She lost her elder son to a blood disorder. Now the only member left in her family- Mihir is suffering from the same condition that took away her elder son. No one can tell how this mother is holding on. Financial difficulties have made this mother helpless. She can't lose her only child.
Every evening Mihir’s mom switches on the TV channel to watch Mihir's favourite cartoon. Because Sujata knows no other way to get 10-year-old son to finish his lunch with no fuss. “I think we have shows sorted for every meal. “This show takes care of his lunch and Sinchan gets him to finish his milk,” says this single mother.

Sujata would love to see Mihir to run around like other children. Even more so, send him to school. With her little son's free spirit trapped in a weak body. Sujata lost elder son to fatal diseases in 2015. It hurts her to see her second child go through the same ordeal that her elder sons went through.

This single mother fights between fear and hope every time they wait in the hallways of Narayana Hrudhaalya, Bangalore for doctors or reports.

Mihir was 6-month-old when he underwent his first blood transfusion.

Since then, he has not seen an end to it. From monthly transfusion sittings to weekly ones, this mother and son have been braving a painful fight against Thalassemia, the very disease to which Sujata lost her elder son.

Mihir was diagnosed with Thalassemia when he was merely a 6-month-old baby boy. Sujata hoped to save her elder son with Mihir's bone marrow. But one blood test declared that the saviour is now a victim of Thalassemia too.

Sujata lost her husband to a heart attack in August 2007. Ever since her life has been a struggle, it came to a standstill when her elder son passed away and now she can't lose the only family member left.

"Who won't be delighted to watch their baby grow?" But fate took that joy away from us. Mihir barely got his father's love. Today, he recalls his father from those few photographs in the family album."

This single mother has been struggling to save her only son

Sujata works in a small firm in Manipal, Karnataka. Her salary is barely enough to keep up with the every day expenses let alone the medical bills. A single blood transfusion alone costs around  15,000 to 20,000 INR. There is no way she can arrange 30 lakhs for the bone marrow transplant.

She has lost all her savings to medical expenses of both her sons, Sujata has nothing left. “With cure just a stone’s throw away, it would be a crime to give up now. I work 16-18 hours a day trying to earn every penny we can.”, says Sujata.

This single mother is fighting with all her might to give her son a life-saving bone marrow transplant. She wants him to experience the joys of childhood. It is her immense love for Mihir that pushes her out of bed every morning and forces her to keep going, no matter what odds are stacked against her. You can help Sujata save her only son, Mihir.

Here are the supporting documents: 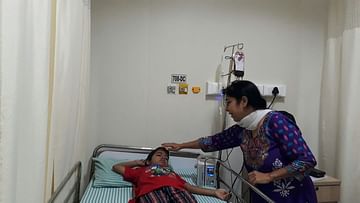 Sujata lost her elder son to this fatal disease and today, Mihir is fighting the same.