3-Day-Old Baby Born Without A Food Pipe Is Starving And Needs A Surgery Today | Milaap
loans added to your basket
Total : 0
Pay Now

“My son was born on the 17th. He has not had a single drop of breastmilk since birth because he cannot swallow anything. He is so tiny and helpless. He cannot survive another day without help.” - Sarjeet Singh

The baby was crying constantly after birth; his mother could not do anything to comfort him

Sarjeet’s wife, Saranjeet Kaur, had a smooth pregnancy and her scans never showed any problem. But soon after the baby was born and given to her, she noticed that he would just not feed.

“My wife tried everything to get the baby to suckle. Even the nurses at the local hospital in UP where she gave birth, tried everything in their capacity. When nothing helped, the doctors said that we have to take him to a better hospital in Delhi because they could not understand what was wrong with him.” - Sarjeet

With his newborn son’s condition getting worse, Sarjeet had no option but to leave his wife behind and rush to Delhi

The baby’s mother Saranjeet was still recovering at the hospital and couldn’t accompany her husband on the trip. She hasn’t even got the chance to hold her baby properly yet, and is inconsolable.

“I called up my cousin in Delhi and told him about the emergency. I was blank and very scared because we had not yet understood the baby’s condition. My wife is feeling guilty because she couldn’t accompany us. But I just had the baby’s well-being in mind - he was hungry and very famished; so I just took the next bus I got to Delhi with whatever little money I could arrange at that time.” - Sarjeet

An X-ray showed that the baby’s windpipe and food pipe were fused. This is why he had a little trouble breathing as well. The doctors in the Delhi hospital that the baby is being treated have told this helpless father that his baby boy will not be able to survive without an urgent surgery.

“The surgery needs to happen today or I will lose my son. I cannot forgive myself if I am not able to make it happen – I have travelled hundreds of kilometers with this small baby in hand just to find help. I hope God does not leave me in this hour of need” - Sarjeet, with tears in his eyes.

“I have knocked on many doors. Not many have helped till now. I don’t have money for food, but that is okay. My son is more important for me than my own hunger. I do not know a lot of people in Delhi - it is a strange city for a poor farmer like me – I need to arrange money fast because my son’s life is on the line. Please help me” - Sarjeet

Sarjeet is a farmer in a small village in Uttar Pradesh. He earns only around Rs 6,000 a month. As his wife’s pregnancy was going smoothly, he had just kept aside enough money for her delivery. His son’s disorder has come as a rude shock to him because he cannot arrange enough funds required for his emergency surgery on time. He needs our help to save his newborn baby and take him back to his anxious mother. 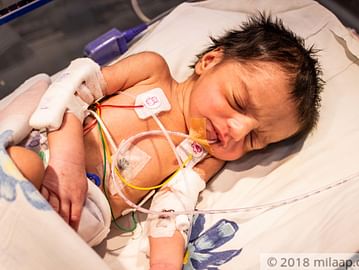 This Baby Hasn't Had A Drop Of Milk Since Birth

Crying his lungs out because of hunger, this baby is in a critical condition. You can save him.