"No Parent Should Ever Lose Their Baby, Please Help Us Save Our Little Boy!" | Milaap
loans added to your basket
Total : 0
Pay Now

SM
You are sending a message to
Shaheen Mahpara
Go back

"No Parent Should Ever Lose Their Baby, Please Help Us Save Our Little Boy!"

"Babies get jaundice. This we knew. When jaundice turned into a series of complications, and our baby boy needed a ventilator to just stay alive, that's when the fear became real. Now we are afraid every waking moment that he will slip away."

Prathiba gave birth to a beautiful baby boy after two years of marriage to Prasanna. They were overjoyed, and the entire family celebrated his birth. She was still at her mother's place in Tumkur when her baby fell sick. His eyes were yellow and head felt hot. A local doctor said he had jaundice. They treated him for that and brought him back home. What happened has thrown the family into shock.

"I took him to Indira Gandhi Hospital initially. He was treated and he felt better. At home also we took good care of him. We thought he recovered. Suddenly his situation got worse. It began with a high fever. He was teething. Again we thought it was normal. He then had dysentery and got very weak. The breathing problem started again and then he had... seizures. That's when we rushed him to Aster."

The medical team immediately rushed the baby into the ICU where he has been on the ventilator and life-support for over a week. His vital organ systems have been affected including the brain, lungs, heart and blood. Baby of Prathiba has acute liver failure, hepatic encephalopathy with seizures, acute respiratory distress syndrome, and sepsis.  He is getting medicines to control the damage, eliminate the infection and restore his bodily functions. Until then he needs round-the-clock intensive care.

"I get to see my baby just about 3-4 times a day. We carry so many germs and he is so fragile right now, so the doctors limit our time with him. He is entangled in so many tubes, it is just disheartening to think God would do this to a baby. Why put my son through this much pain? I wish I'd known before, I wish I could have done something about it!"

This little boy is suffering since he was 5 months old. Now, at 9 months, he is struggling to fight with every ounce of will power left in his little body. The team is not giving up on him, and neither is his family. He needs to be in the ICU for a little while longer until he recovers. The expenses are rising and on Rs. 4000 salary Prasanna cannot afford Rs. 6,00,000 for the treatment to keep his son alive.
Your contribution can give this baby boy a fighting chance, and time to heal.

Click here to contribute to Baby of Prathiba or for more details on this campaign. 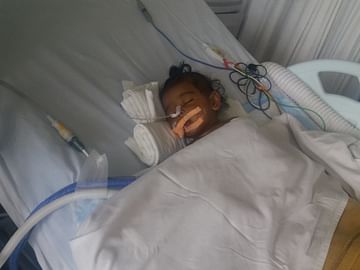 Help save Baby of Prathiba from Vital Organ Failure

This 8-month-old boy is suffering from liver failure that is affecting other organs.