Shares
Shares
Share on whatsapp
Despite taking good care of his wife during her pregnancy, Murugavel could only watch helplessly when she gave birth to their son at just 34 weeks of pregnancy. He had spent every minute praying for the welfare of both mom and baby outside the delivery room, and was relieved when the nurses said that both are doing well. His happiness knew no bounds, but little did this poor father know that his baby, who had come much earlier than expected into this world, would suffer from life-threatening inflammation in his intestines.


“I did not even get to see him before he was rushed to the NICU. My wife has not breastfed him even once. From the past two months, our lives have only been about asking the doctors the same question every day – ‘Will our baby survive?’ I am not able to sit down calmly even for a minute – the image of his small body covered in tubes haunt me day and night. I have given away whatever little I had saved over the years for my children’s future, and have nothing left to save my baby boy.”-Murugavel, with tears in his eyes.

Murugavel and Nandhini’s sweet baby boy turned blue within hours of his birth, and has been struggling to survive ever since

Nandhini believed she was having a smooth pregnancy until one day at 7 months of pregnancy, she got a piercing pain in her lower abdomen. She had taken utmost care in all the past months and did not expect anything like this to happen– before she could make sense of it all, she was told that her baby’s legs are coming out of her cervix and needs to give birth fast or the baby would not survive. In a few hours, the baby boy was born and rushed to the NICU as he had turned blue.


“We were getting so worried – my wife was still unconscious and did not know what had happened to our son. The doctors told me that his lungs had not developed properly yet and he was turning blue because of low oxygen supply to the brain. I didn’t know at that point if he would live beyond a few hours – I just hoped he would fight all odds and be okay for the sake of his mother who has been inconsolable since she gave birth unexpectedly.”-Murugavel.

To make matters worse, the baby was found to have small holes in his intestines and underwent urgent surgery for it

This poor baby was already struggling with severe breathing problems and was on the ventilator, when he was found to have a hole in the intestine that needed immediate closure. Murugavel could not believe the bad luck that had befallen his family – still he stayed strong and begged his relatives and friends to help him fund the surgery urgently.

“I had never heard of small babies having holes in their intestines – I cannot imagine the pain that my little one must have gone through. My wife started crying when she heard of our son’s condition and has not stopped to this day .I had no time to waste, I knew that my son’s life was in danger and got some money from dear ones who knew our situation. I was thankful when the doctors told me that the surgery was successful, but got worried when they said that he still needs more time in the ICU to recover completely as he still has some inflammation and infection in the area that can turn fatal without treatment. ”-Murugavel.

Murugavel has not been able to go to work for 2 months now, and fears that he will not be able to continue his baby’s treatment

Murugavel used to work as a worker in the parcel section of a small hotel in Chennai. He used to make Rs 400 daily and barely managed to take care of his wife and 3-year-old son. He had been working hard and saving up to welcome his second baby when these unfortunate trail of events happened, throwing his financial and mental state off balance. He had to borrow to fund the baby’s treatment till now and has nothing left.

“My baby is still in a critical state and needs 2-3 weeks more to recover completely. I don’t know how I will be able to buy food in the coming days, let alone paying for my child’s treatment. I cannot even eat a morsel without feeling like throwing up – sadness has filled me completely.  I get to see my son once every day – between 5 and 5.30 pm – that is the only time I get some peace of mind. I want to take my child home and raise him with love – please help me.”-Murugavel pleads.

Murugavel and Nandini’s 2-month-old baby is suffering from inflammation and related infections in his intestines and needs prolonged NICU stay to survive. He also needs help to fight breathing problems, so that he can go back home healthy and happy. His worried father does not have a paisa left to spare, as he has not been able to go to work for so long now. The family has sold all that it had, but expenses still keep adding up every day. They don’t have any other way except seeking help from Good Samaritans on the internet.

Click here to save baby of Nandhini and Murugavel 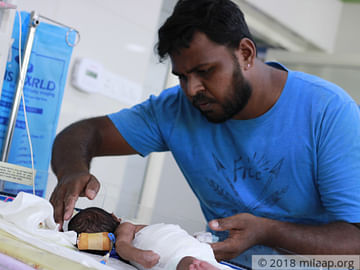 Without antibiotics and assisted feeds, Murugavel's baby boy will not live another day.