These Parents Together Are Starving Themselves To Save Money For Their 5-month-old Son's Treatment | Milaap
loans added to your basket
Total : 0
Pay Now

Shares
Shares
Share on whatsapp
Mamatha gave birth to a baby boy in July through a C-section. Unfortunately, soon after his birth, her baby developed an infection and was admitted to the ICU. Desperate to save their baby, the new parents skipped meals to save cash for their baby's treatment and medicines. Still, they are far from the goal required to save their baby.


Mamatha and Karunakar with their baby

Two months after birth, Mamatha's son recovered and was discharged but within 4 days, he fell sick again and they had to rush him to a hospital in Ramsagar, a small village near Warangal. Nobody would help the child, so Mamatha and her husband decided to come to Hyderabad.

“They all told us that there was a 95% chance that the baby would die. Finally an uncle told me to come to Rainbow Hospital. It was here that my son finally started getting better. He was in the ICU for two months and only yesterday he has been moved to the general ward,” explains Karunakar, the baby's father.

The good news came after a lot of sacrifices. Mamatha – still weak and recovering from her surgery lived two months in the ICU waiting hall. Karunakar sold off his small farm and borrowed heavily to pay for treatment. They ate only one meal – split between the two of them – to buy medicines for the baby.


Mamatha is still weak from the delivery, the stress has prevented her from getting better

Though this little boy is showing signs of improvement, he is not out of danger. He needs sustained treatment so he can beat his infection and get well enough to recover. Karunakar and Mamatha are determined to save him – their sinking financial condition.

Only thoughts of saving his baby keep Karunakar going

Even though he has a tube in his throat and IV lines going into his arms, Mamatha's son is finally able to summon the energy to move his hands and legs. His parents are sometimes, able to coax a smile out of him – each smile so much more precious than the last because of his delicate health.

“He is too small to suffer so much. When one thing is taken care of, another complication comes up. Infection caused his breathing to stop. So a tube was put in his throat to help him breathe. Then his throat swelled up because of the pipe. Every day, I remind myself of his pain when I feel ashamed about asking people for money,” explains Karunakar.

Karunakar is a small farmer who earns Rs 100-300 a day when he can find work. Having a piece of land helped him grow enough to eat – but even that is gone now. He has sold everything, taken loans and paid bills worth Rs 10 lakhs till now. It would be really cruel fate for these parents if the baby's treatment is stopped now – when he is finally showing signs of getting better.

These parents have spent only 5 months with their child. Yet, their love is deep and enduring. At great cost to themselves, they have sacrificed so their child may live. They sold everything they had and brought their child to the city, hoping to save their first child.

Your contribution can help Karunakar and Mamatha save their baby boy and take him home. 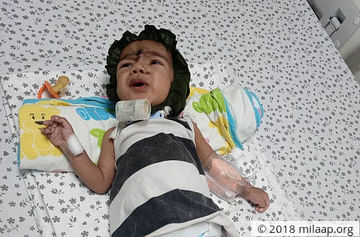 Karunakar Sold Everything He Had To Save His Newborn Child

This 5-month-old baby needs treatment to get better. Help his desperate parents save him.