Help Babul Das Fight Throat Cancer Before It Spreads To The Rest Of His Body | Milaap
loans added to your basket
Total : 0
Pay Now

Shares
Shares
Share on whatsapp
Six months back, 65-year-old Babul Das from Bangladesh learnt that he had cancer. The doctors advised him to go to a bigger, better hospital for treatment. Fearing for his life, his family brought him to India. He managed to get a bed in Mazumdar Shaw Medical Centre, where he is finally undergoing chemotherapy. The problem, however, is the fact that the gravely sick Babul has no money to continue treatment.

Continued Chemotherapy is His Only Hope

Babul has Oropharynx Carcinoma which is a severe form of throat cancer. In a bid to ensure that cancer doesn't spread throughout his body, thereby turning fatal, the doctors have recommended 6 cycles of chemotherapy. It is the only thing that will stop his cancer from spreading.


"He feels much better now. He cannot speak due to his ongoing treatment but at least he is not in much pain. Cancer is not an easy disease to fight. He puts on a brave front all the time, but the moment he thinks we are not looking, he cries," said his son, Suman.

He is 65, Father of Three, And The Sole Breadwinner Of The Family

Back in Bangladesh where Babul is from, he has a stationary shop. During the best months, he makes close to Rs 7,000. It is with this amount that he runs his family of six - him, his wife, and four kids. His eldest son, Suman is 30-year-old and is currently unemployed because he is in India taking care of his father. His youngest daughter is still in college.

For past few months, he has been in Bangalore, along with his elder son for his treatment. Paying the rent for the house and arranging for food has put a further dent in their already humble pockets. The doctors are not yet to confirm how long Babul Das will have to stay back in Bangalore.

He still has to undergo few more rounds of aggressive chemotherapy, followed by radiotherapy, if necessary. The estimated cost of entire treatment is Rs 6.6 lakhs. At present, he is waiting to arrange for the required funds and despite his best efforts, is coming up short.

"Friends Have Stopped Taking Our Calls"

"If nothing else, adversity lets you know who your truest friends are. Now that we are in this life and death situation, people have stopped taking our calls. They think we will ask them for money. They don't even consider the possibility that we might be calling them for emotional support. Sometimes all we want to hear from our closest one that everything will be fine. I guess, we never had someone like that," Suman says.

65-year-old Babul Das is his family's only support system. Even though his children are older now, they don't have a job that could help their father in arranging funds required for his treatment. His children are desperate to save him, but given their financial condition, they are unable to do so. Your contribution can help Babul go back to his family and live a life that is not marked by pain and suffering. 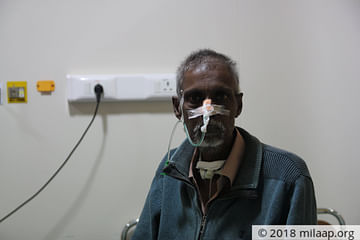 Babul's life changed after he found out that he has throat cancer. He needs treatment to live