These Premature Twins Under Intensive Care Will Lose The Battle If They Don't Get Funds For Treatment | Milaap
loans added to your basket
Total : 0
Pay Now

SN
You are sending a message to
Sheryl Nayagam
Go back

Shares
Shares
Share on whatsapp
Suvarna's twin daughters were born just 7 months after they were conceived. They are extremely premature and both are struggling to breathe. They need to stay under close observation for 2 months. The parents Suvarna and Vikas have waited 8 years for these babies, but they have no money left to keep them alive.

Suvarna touched her babies 2 months after their birth

“Only 15 days back, I was finally allowed to touch one of them. We have not yet held them. Even a slight infection in this stage can be very dangerous for the girls. It is for their safety. I am ready to wait as long as they recover,” says Suvarna.
The twins are Suvarna and Vikas' miracle – born when they had both given up hopes of having children. When Suvarna conceived – she even gave up her job as a teacher. Just so she could take all the right precautions and nothing would go wrong with the pregnancy.
But things did not turn out as planned and Suvarna almost died during the childbirth. In her seventh month of pregnancy, Suvarna woke up one morning to see her clothes soaked in blood. Very worried – Vikas rushed her to the hospital. Suvarna is unable to think back on that day without remembering the horror of all the blood.

“There was so much bleeding – I had the worst thoughts about what had happened to the babies. Turned out the placenta had gotten crushed under them and was gushing blood. They had to be delivered or they would suffocate inside,” Suvarna recalls.

Suvarna at the hospital

The twins were born on June 6, 2017 two months before their due date. Their lungs were not yet fully formed and they came into the world gasping for breath – aching for oxygen. They have both been put on ventillator support. One of the infants even needs a corrective heart surgery.

Every day, the babies are getting stronger but they need more time

Vikas works as a peon in LIC office in Pune. Every month, he earns 7,000. With his income alone, he managed to put together over 5 lakhs for the treatment so far. “We sold off our jewellery and all the small savings we had made till now. Now, we have nothing to pay for their treatment,” says Suvarna.

Every day, Suvarna visits the babies – gazing at them from a distance. Her babies have been under intensive care for over 2 months now. They are so weak, they used to hardly move.  But one of the babies has just started moving her hands and legs This sent a sense of relief to the couple.

The twins' medical bills are running alarmingly high and their parents have nothing left to pay. Every day, Suvarna and Vikas live in fear of the hospital forcing their sweet, innocent daughters out because they don't have money for the bills.

The babies are slowly getting stronger – making a strong attempt to survive the shock of their birth. If Vikas and Suvarna are able to keep their children in the hospital for another 2 months, they won't be in danger. Help this couple get their children to safety. Your contribution will help twins of Suvarna live. 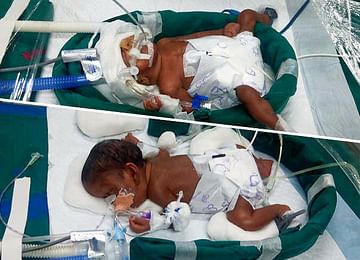 Help Suvarna save her twin babies