SJ
You are sending a message to
Shalini John
Go back

Shares
Shares
Share on whatsapp
Until five years ago, Arun led a fairly normal life and managed the weight of his leg. It was his late mother's desire that her son have everything a normal child did, despite his Giant Leg condition, and Arun thought about her in his most difficult moments to keep him going. But today, Arun's giant leg alone weighs over 100 kgs and he is unable to move. He wants a wheelchair that can help him regain his independence.

Arun P. Rajasingh, was born early morning, March 15, 1981. But soon after, he became sick and was put in the ICU. Doctors didn’t expect Arun to live for more than two weeks. They gave up on him and indicated that the baby had a serious problem, but against all odds, he survived. Later, he was diagnosed to have the rare Giant Leg disease, in which the leg becomes disproportionately large compared to the rest of the body. Though saddened, Arun and his family never got disheartened.

Help comes for the promising mind

Arun studied at St. Joseph’s Boys School at Vepery, Chennai. Being naturally bright, Arun topped all of his classes. His family, particularly his mother, a well-loved Physics teacher, was very supportive and always encouraged him to achieve his best. In class 11, a close friend of his family doctor decided to help him. She sponsored his trip to the Boston's Children Hospital, a top children's hospital in the U.S.

There, Arun was investigated by two senior doctors and interns from Harvard Medical School. The doctor prescribed the solution that Arun would hear over and over. Amputate the leg and use crutches. But Arun decided he would not get rid of something God had chosen to give him.

Losing his pillar of strength

While in the U.S., his mother passed away. The family decided not to upset him and kept the matter from him. The grief hit him hard when he did hear about her death. She was the person who fought hard to make sure Arun had a normal upbringing, in a regular school. His sister, Shalini says that at this point he lost the one thing that kept him going, his mother's love.

Eventually, the grief caught up. Living alone in the U.S., he developed severe Obsessive Compulsive Disorder (OCD). By 16, he would talk to himself and had a nervous breakdown, which was diagnosed as post traumatic stress disorder. So Arun left the U.S. and came back to India. He had to repeat a year because of studying in the U.S. Even with the OCD and the fighting in his mind, Arun managed to score 90% in his Class 12 results.

Arun then went to an engineering college 700 kms away from home with a major in computer sciences. After college, he went through four jobs in designing over the next two years. Arun felt he did not fit any of these companies because he had bigger dreams and none were going to come true if he stayed put in these jobs. And that was the one thing he always had, big dreams. Arun’s zeal for perfection drove him to establish the web design firm, Kenriche. The foundation of Kenriche Technologies, Arun's words is delivering "products beyond perfection."

Motivation to regain his mobility

“Yes, it did affect my progress very much but I kept going. If it wasn’t for my physical and mental conditions, I would have had 5 offices in different countries. I am aware of the potential in me. I can’t travel to meet clients, attend start-up events and network physically, but it is passion not the commute that helps businesses. I share a very close relationship with my clients worldwide," says Arun proudly.

At present, Arun works out of a single room and added mobility will help his business. Arun wants to get a Wheel Chair Accessible Vehicle and a Powered Wheel Chair and regain his independence. He has been confined to a room for the last month because with the leg of the weight increasing to 94 kgs, he is unable to move.

He has placed an order for a customised chair at Callidai Motor Works Team (Customised Accessibility Equipment Manufacturers). They have managed to pay the advance of 50,000 ruppes on Jan 5, with the help of a loan from a well wisher. Arun is eagerly waiting for his first trial at the Gummidipoondi factory. 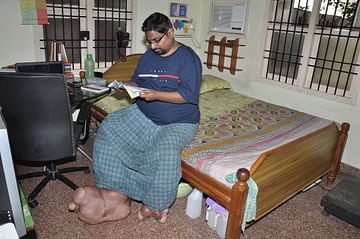 Arun has zero mobility now due to his rare giant leg. Your contribution will help him buy a wheel...