An Accident Almost Took My Brother’s Life Away. Help Me Give It Back To Him | Milaap
loans added to your basket
Total : 0
Pay Now

You are sending a message to
Arjuman Ahad
Go back

An Accident Almost Took My Brother’s Life Away. Help Me Give It Back To Him

Shares
Shares
Share on whatsapp
If you knew Akbar Ali, you would agree that he is a kind, friendly and decent man, who lives up to his name (Akbar means ‘great’). And that he loves animals, especially cats. But what you would find striking about him would be his commitment to his family. He is a responsible son and a loving brother. My name is Arjuman, and as his sister, I can see the affection in his eyes even now – when he is battling for his life in the ICU and cannot speak a word.

The day our lives took a turn for the worst

I remember the night very clearly. I had just uploaded his profile on a matrimonial website to look for potential matches. Akbar was very happy. Mom, dad, I - we were all very happy. Right after dinner, Akbar said he had to go out to get his bike checked. We thought nothing of it – he would always return home early, no matter what. But only that day he didn’t.

Minutes later, we got a phone call informing us that he had been in an accident and that things looked bad. His bike had crashed on the metal barricades and he had gone sliding across the footpath, grievously injuring himself. I remember a mixed feeling of chaos and grief taking over me when I learnt what happened to him. Mom and Dad were too shocked to say anything. But it was just the beginning.

When we saw him, he was bleeding from everywhere. At that point, we were not sure if he would survive. We took him from hospital to hospital, trying to get him admitted. We were refused admission in many hospitals because they thought it was too serious a case for them to take up. Finally, he was admitted at Apollo Hospital, Bangalore, where he has been for the last 50 days.

Akbar needs constant supervision or he will not survive

He has been operated on for four times already. There was a swelling in his brain and they had to remove a part of his skull to lessen the pressure. He even survived a major brain stroke. I have seen him evolve from a near-vegetative state (when he was in a coma for the first two weeks) to a point where he can understand what we are telling him. But his problems have not gone away fully – he is not fully conscious. He cannot swallow food on his own, and the risk of blood clots forming in his windpipe can potentially choke him. As much as it pains us, he needs constant care that we cannot afford anymore.

He is helpless and so are we

The doctors have instructed us to keep talking to him; they say that will bring him back to life. So that’s what we do now – pretend to be happy- so that our Akbar comes back to us.


I bring my 2 year-old son to the hospital every day because my brother really loved him. But my son gets scared when he sees his beloved uncle covered in tubes. And I can sense that Akbar gets upset when his nephew backs away from him. My parents are devastated and completely broken from the inside, but we manage to keep a smiling façade on. For our Akbar, for him to be all right.

Akbar needs to be in the hospital for one more month and needs two more major surgeries. After that, he needs medical care at home, which includes hiring private nurses for him. My parents and I have spent nearly Rs 14 lakh on his medical expenses alone. We already spent all the money that we had saved for his wedding. My dad is now selling off things at home to pool money – precious things he had collected for over 45 years. Our house is mortgaged. Our finances are dipping but we want to save Akbar at any cost. He is the light of our lives, even in this darkness. Please help us save him. 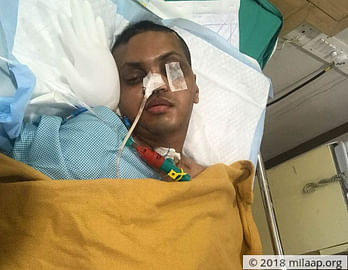 Akbar Ali needs your help to recover from a serious accident

Akbar needs two surgeries and a month more in the hospital to survive. Please save him.