3 year-old Akash Is Losing Oxygen Rapidly And Can Be Saved Only By A Heart Surgery | Milaap
loans added to your basket
Total : 0
Pay Now

Shares
Shares
Share on whatsapp
Akash’s favourite place in the world is his mother’s lap, and for good reason. When he is breathless and almost fainting from exertion due to a congenital heart defect, it is only there he finds solace. His mother, Shanthi, makes sure that she holds her son close every time he comes to her for comfort. 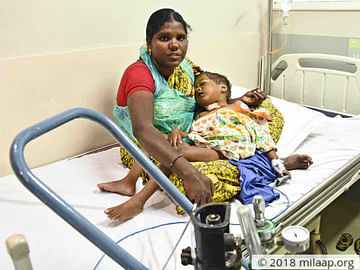 Save Akash before he succumbs to breathlessness

3 year-old Akash has a severe heart disease for which the only treatment is a heart surgery.