With Father Away, Mother Struggles To Save Her 4-Year-Old From Deadly Heart Disease | Milaap
loans added to your basket
Total : 0
Pay Now

With Father Away, Mother Struggles To Save Her 4-Year-Old From Deadly Heart Disease

“Since Aakash’s birth, my husband has been saving every rupee he earns to try and treat our son’s heart disease. He has hardly been able to spend any time with him, but we have no other choice. It is important to get him treated in time. He’s had 3 surgeries so far, and it is only then that my husband was able to come see us. Now Aakash needs another surgery in less than a month. My husband is toiling away, day and night, but it’s not enough.” - Shanthi.

Baby Aakash was born blue, his breathing was laboured, fast and loud. Shanthi and Rayar were expecting a healthy baby and they were terrified of seeing him struggling. Before they could understand what was happening, he was taken to ICU and kept on the ventilator. After two days, the doctors told them that he has heart disease - holes in his heart and the valves are not properly formed thus reducing the blood flow to the lungs.

Aakash had his first surgery when he was 3 months old. He was seemingly better but did not recover completely, he needed an artificial valve when he turned 3 and the third surgery was done within a week to improve his breathing. Unfortunately, none of this helped him. His condition is getting worse with each passing day.


"The first thought I had when I saw him was that he wouldn't make it but over the years I realized that he is stronger than the disease. He has spent most of his days in the hospital, he cannot run like other children, he gets tired very fast and hardly eats but he is a happy child despite all the pain" - Shanthi

Rayar is a daily wager, he works for the National highways road project. He earns Rs 8000 per month. He was doing farming in his village near Ariyalur District, Tamil Nadu but when Aakash was diagnosed with heart disease, he went in search of a job to Kerala and since then he is working there. He has spent 1 lakh so far on his treatment, he has exhausted all his savings and borrowed heavily from his friends. Now he needs 4 lakh more for the open heart surgery and he does not know whom to turn for help.

"Doctors told us that he has good chance of recovery with this surgery and it has to be done in a month's time. We struggled all these years only to see him live a normal life, please help us save him." - Shanthi.

This poor family has been longing to live together and have a normal life like others, they are struggling to save their 4-year-old son from heart disease, you can help their dreams come true. 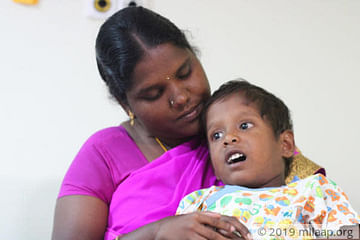 This Little Warrior Has Scars All Over His Chest, He Needs Your Help To Fight Heart Disease For Good