Shares
Shares
Share on whatsapp
Sandhyarani Sethi is a mother of 3, living in Muniguda. Her 3 young kids study at a school, Saraswati Sisu Mandir, near her house. She is a home maker and her husband is a teacher in a local school. She purchased a solar lantern almost a year ago with the help of a loan from Milaap. The lantern is primarily used by her kids to study during the blackouts. Hitherto, they would rely on an inverter light that costs Rs. 2000. The light has a very brief life-span of 6 months, and also increases the electricity bills by Rs. 100-200. The solar lantern costs almost the same as the inverter light. She has been using the lantern for nearly one year and so far, has not come across any defects.
The family also owns a small plot of land on which they would grow rice for self-consumption. They appointed laborers to work on the field in the morning. However, occasionally in the night, her husband visits the fields to check if the work is done properly or to check the well-being of the cattle. Many a times, when the inverter light wouldn't work, he was forced to walk in the dark, which involved a risk to his life. Now, he uses the solar light and can comfortably visit the fields or the cattle whenever required without any apprehensions. Over the last couple of months, blackouts in Muniguda have been infrequent but the area is notorious for blackouts for prolonged hours during summer. This affectionate mother says, “I can manage to cook even with the minimal light from the fire, but I don’t want my kids to stay in the dark during those blackouts like it happened quite often last summer when the inverter light didn't work.” She believes that the solar lantern will prove to be a huge asset for her family, especially her kids, during the upcoming summer season.

Sandhyarani Sethi with the Solar Lantern outside her house. 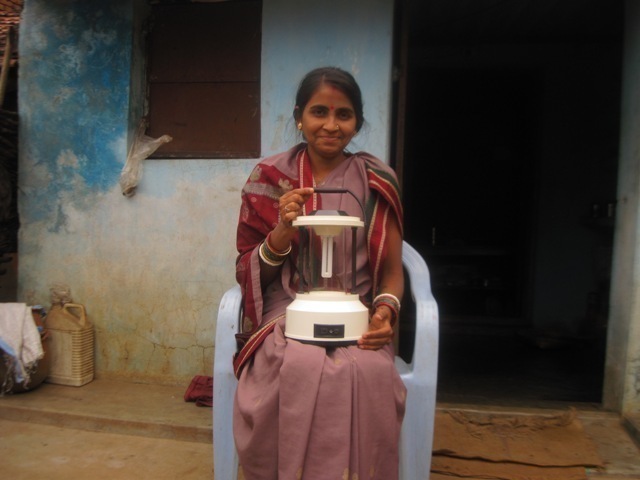 Sandhyarani Sethi with the Solar Lantern outside her house.