Even Their Parents’ Touch Can Be Fatal For These 15-Day-Old Twins | Milaap
This campaign has stopped and can no longer accept donations. 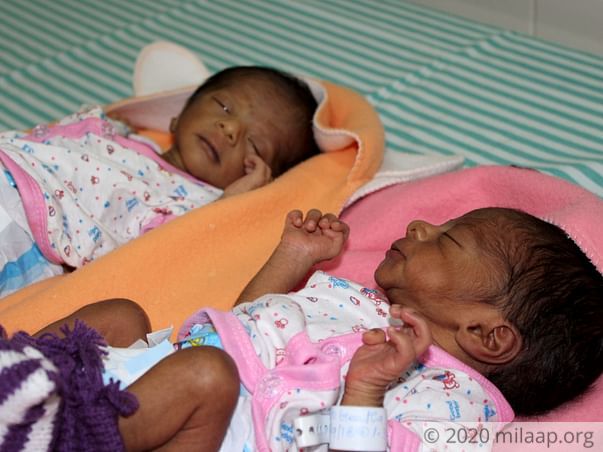 Chandrasekar stands outside his twins’ room, nervous. He uses the sanitizer once more, just to be sure, and wipes his hands repeatedly. He’s terrified and his heart races faster than ever. As he finally finds the strength to open the room door, he sees his little baby boys lying on the bed, weak and helpless. He watches them from a distance, longing to touch them and hold their tiny hands just for once, but he has only two minutes to see his babies.

“Every time I hold them, my body shivers worrying that I may cause a threat to their lives. The door to their room is always closed and windows tightly shut because their little bodies can’t fight even the smallest of infections. As parents, we’re supposed to be protecting them, but because of their disease, even we can be a risk to their lives. They haven’t known a life outside this room. The doctors say that without a transplant, they can die in the first few months.” – Chandrasekar, the twins’ father

What should've been a celebration for the parents, soon turned tragic

Four years ago, Geetha and Chandrasekar lost their first child when he was just 3 months old.  They took him to many hospitals, but by the time his condition was diagnosed, it was too late. Living with the guilt of not being the able to save their first one, they were elated with the news of her pregnancy. They made sure to take all the required screening tests well in advance, and their joy doubled when they gave birth to twins.

Unfortunately, their happiness was tragically short-lived. After their delivery, Geetha held two seemingly healthy babies in her arms but found out that their platelet count was dangerously low. Three days after their birth, the twins were diagnosed with a rare, life-threatening disease –  Severe Combined Immuno Deficiency (SCID), the same one that killed their first child four years ago.


“It took me years to come to terms with the loss of my first child, and now life has brought us to the same place again. What can be more cruel than a mother being told that even her touch could be fatal to the lives of her children.” - Geetha, mother

Their parents live in fear of losing them every day, even a small infection can be life-threatening

Geetha and Chandrasekar’s 15-day-old twin boys have Severe Combined Immuno Deficiency (SCID), a rare and life-threatening disease that is present at birth. The disease causes the child to have very little or no immune system. As a result, the child's body is unable to fight off infections. This disease is also known as the "boy in the bubble" syndrome because even living in the normal environment can prove fatal to these children.

Children with this rare, inherited disease become very ill with illnesses such as pneumonia, meningitis, and chickenpox and can die within the first year of their life. A bone marrow transplant, which will help increase the twins’ immune system, is the only permanent cure. The twins have just a few weeks left to get the life-saving transplant.

Despite all his efforts, this farmer father is struggling to save his twins on a meagre income

Chandrasekar works on other’s farms in Kalugumalai, Tamil Nadu for a meagre amount of 200 per day. He's the sole breadwinner of the family, but his daily earnings and little savings aren’t enough to save his newborn twins’ life. This is the most helpless Geetha and Chandrasekar have felt – nothing they do is enough to save their children and they’re running out of time.


“For the past 10 days, all I’ve been trying to do is find a way to get them treated. I’ve asked relatives and neighbours, and they’ve all lent me what they could. But it isn’t enough. Even if I borrow money from everyone I know, I won’t have enough to get them treated. I tell my wife every day that we’ll find a way to save them, but now even I’m losing hope.” - Chandrasekar

The 15-day-old twin babies suffer from SCID, the same ailment that took the life of their elder child 4 years ago. Only an urgent bone marrow transplant can help them survive the disease that’s making them weaker by the minute. Even a small infection can be fatal and their parents might lose them even before they’ve had a chance at life. Geetha and Chandrasekar are half-matched donors for the transplant and are desperate to save their babies, but 72 lakhs is above and beyond what they’ll ever be able to afford. They need your help to save their children and give them a chance at a normal and healthy childhood.

Your support will save these 15-day-old twins.

The specifics of this case have been verified by the medical team at the concerned hospital. For any clarification on the treatment or associated costs, contact the campaign organizer or the medical team.
Estimation letter 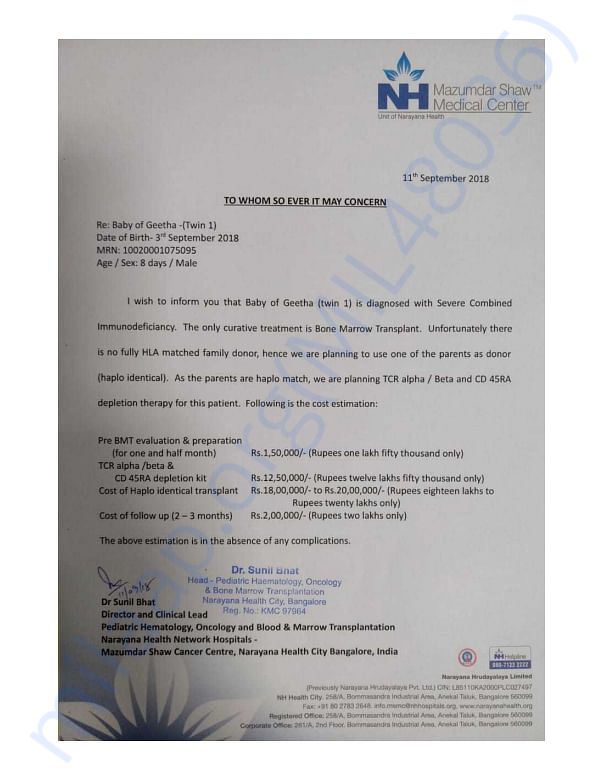 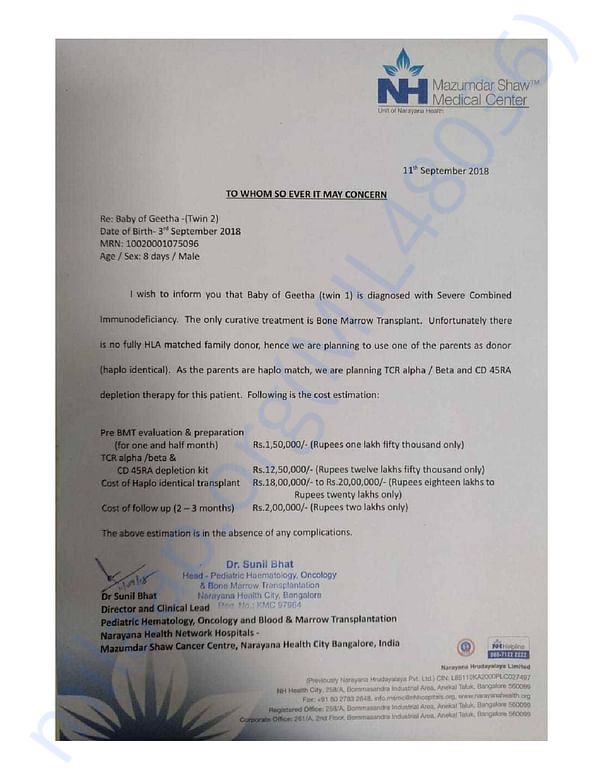 Thank you to all of you for the love and support blessed on my babies.

The twins are stable and are under medication. The Bone Marrow Transplant is to be scheduled in 2 weeks in another hospital and their mother will be  the donor. They are doing well and are responding well to the treatment.

Thank you once again. Keep supporting. We shall keep you posted.

We are grateful for your love and support.

Both our babies are at home now and are showing a lot of improvement. While they are still incredibly delicate and need to be handled with utmost care, we are happy to have them at home.

We are awaiting reports of the genetic test, once we receive the results the doctors will plan the next course of treatment.

Please continue to share the campaign with your friends and family! Keep our babies in you prayers!

Thank you for blessing us with your love and support.

Our babies are stable as of now. The doctors have asked us to visit  the hospital sometime next week so they can run some tests. Based on the reports they will take a call on when the operation can be scheduled and what the future course of action will be.

Please continue sharing the campaign and praying for our children. This means a lot to us! Thank you all.

Report fundraiser
See how thousands are crowdfunding for their causes on Milaap
Rs.106,792 raised

Donated to this campaign via Paytm? Click here if you can’t find your donation listed below.
AA
AYUSH ASTHANA donated Rs.101

Donated to this campaign via Paytm? Click here if you can’t find your donation listed below.
AA
AYUSH ASTHANA donated Rs.101 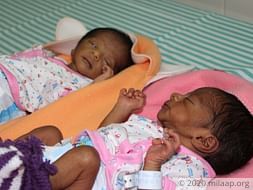