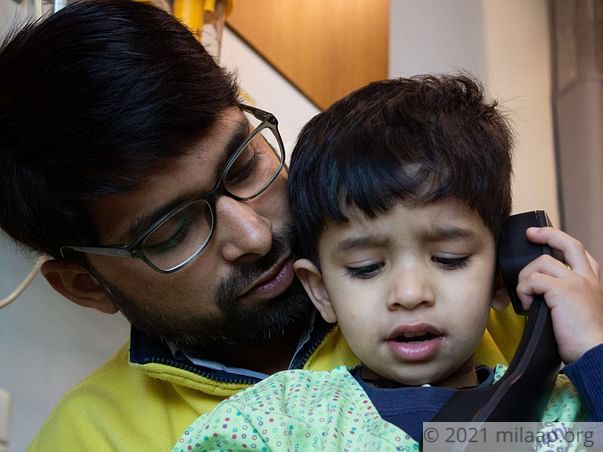 Saatvik loves goofing around and playing with his toys. Minakshi and Yogesh are always on their toes trying to stop him from his next ‘adventure’. He is just like any other mischievous kid his age and just by looking at him you would never know that Saatvik has profound hearing loss in both his ears. He plays with the phone but has never heard it ring. The only way he would be able to hear is through a cochlear implant surgery on one of his ears but his parents are unable to afford it.

‘Since he can’t hear anything, he is unable to speak as well’

Minakshi and Yogesh’s life revolved around Saatvik - they were leading a happy and a contented life till some of their relatives pointed out that their little boy wasn’t responding to sounds.

“We were heartbroken - he seemed so normal, there was absolutely no other problem. We took him to so many doctors but nothing came out of it. Since Saatvik can’t hear, he can’t speak as well. He is 3 years now but he doesn’t say a word. He has been on speech therapy but there’s hardly any improvement,” - Minakshi, mother.

‘No one could tell us why this happened to our son’

Little Saatvik is unable to hear anything at all. He doesn’t know how the birds sound when they chirp or when the rain hits the ground. The poor boy doesn’t even know the sound of his mother’s voice.


“Just after Saatvik’s birth, he had a severe fever and was admitted to the NICU for 3 days. Again, when he was 8 months old, he had pneumonia. We were thankful to God that he was cured of all these but now the doctors are suspecting that these might be the reason behind his hearing loss,” - Yogesh, father.

‘If there’s any more delay for the surgery, Saatvik will turn deaf forever’

Minakshi and Yogesh tried so many treatments and medicines but nothing seemed to work on Saatvik. The doctors have told that he needs the cochlear implant surgery in his left ear - without that he won’t be able to hear ever. Yogesh works in a private company and his modest income has been enough for his family. But since last March, he has spent about Rs 2 lakhs for his son’s treatment. His savings are all used up and with no one to turn to for help, Yogesh doesn’t know how he can arrange for 10.2 lakhs for the surgery. You are his only hope now.

With your support, Saatvik will live a healthy and normal life