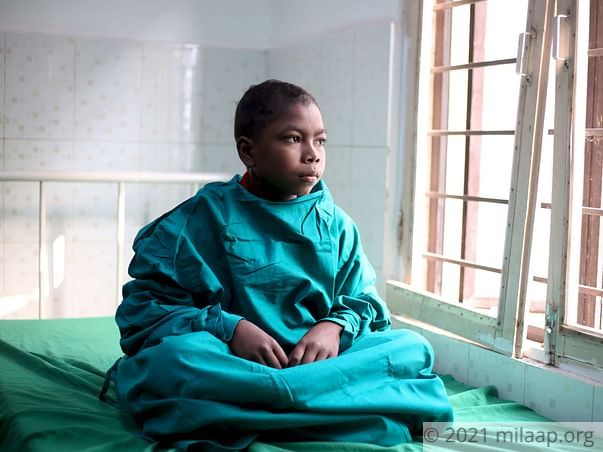 Omm has gotten so used to chemotherapy that he has stopped complaining about it to his parents. Cancer has silenced him, and Fakir Mohan and Jhunurani are more worried than ever. They live in a 3-room mud hut in a small village in Odisha, but despite his poverty, Fakir Mohan pledged his land to take a loan to fund Omm’s treatment when he first fell sick. Before he could pay back the first loan, Omm’s cancer relapsed. Now, he has nothing left to mortgage except his small hut.

“My family will be forced to live on the roads if I have to give up my small hut too. What meagre amount will I get in return? I am sure that will not be enough to afford his chemotherapy,”-Fakir Mohan, father

‘He was so happy to go back to school, our lives became normal again'

Omm (12) was first diagnosed with severe blood cancer in 2013, when he was just 6 years old. A meticulous, well-liked student and a teacher’s pet, everybody in his school was worried when he had stopped attending classes all of a sudden. Omm learnt of his condition from his father, who fought back his tears while telling him. But surprisingly, Omm took the news quite well. Even when he was extremely weak, he would be brimming with confidence. In the middle of his treatment, Omm went to meet his classmates and teachers and told them that he would be back soon. At that point, he was so positive that he would beat cancer. And he did, until it came back for him.


“After two years of treatment, he was declared cancer-free in 2015. He was so happy that he could finally go back to school and lead a normal life. He had just started focusing better on his studies and following a routine when he was down with high fever again. We prayed for it to not be cancer again, but who can stop fate? From 2017, his life has revolved around hospitals and suffering again.”-Fakir Mohan

Photo taken when Omm was about to leave the hospital in 2015, after being declared cancer-free for the first time

Along with Omm’s smile and energy, his parents’ hopes have waned too

The Omm that Jhunurani and Fakir Mohan know never stayed quiet for more than 5 minutes. He’d never stay idle – he was always either helping his father on the farm or his mother in the kitchen. Today, Omm is the complete opposite- his parents can’t make him smile despite their best efforts.

“When we tell him that he can beat this dreadful disease, he dismisses it. He tells me - 'I know that you're lying Ma. You have been telling me this for many years now. I think I'll leave this place only when I die!’ This might be our last chance to save him.”-Fakir Mohan

This is their only chance to save him

The family was completely dependent on farming for income – and this varies depending on the harvest.  Some months, they get as less as Rs 3,000 too. Now with no land or any money left, Fakir Mohan has nothing to save his son Omm. Omm has braved the gruelling chemotherapy so far, and it's the only thing keeping him going. He needs your help to get timely treatment and fight cancer. 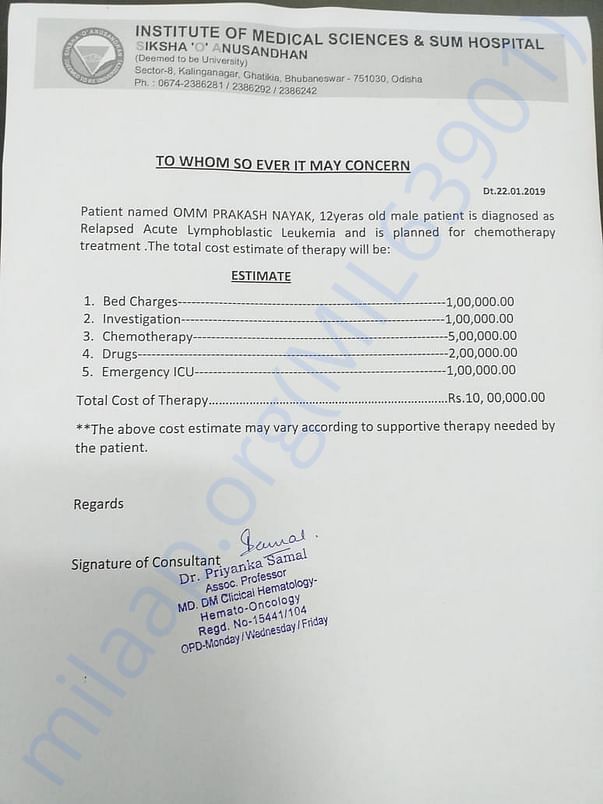 Scan & donate with any app
check_circle_outline Download payment receipt
Report fundraiser
Know someone in need of funds for a medical emergency? Refer to us
Rs.17,611 raised

Hi Kim champ very soon u will be healed by Almighty God 🙏..Smile always ... Nothing is impossible for God..Amen

Hi Kim champ very soon u will be healed by Almighty God 🙏..Smile always ... Nothing is impossible for God..Amen 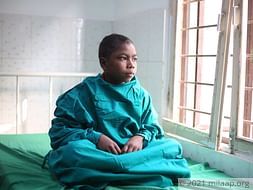