3-Year-Old Starves Because His Liver Is Pushing Against His Stomach | Milaap
This campaign has stopped and can no longer accept donations. 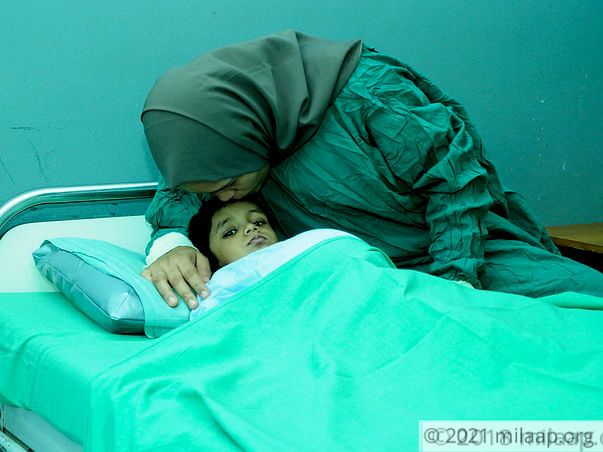 “Up until now, he would have small pieces of chapathi and water if we force him, but now he cannot eat anything due to his swollen stomach. He squirms in pain if his own hands brush against his tummy by mistake. Life has become a living hell for him.”-Shahul Hameed, father of 3-year-old Muhammed Shibil.

Baby Shibil is suffering from a severe liver problem, Caroli disease, an inherited disorder characterized by abnormal widening of the ducts that carry bile (a fluid that is important in the digestion of fats in the body) from the liver. His liver is completely infected and enlarged, and is pushing against his stomach and other vital organs. An immediate liver transplant can save this child’s life, but his parents belong to the lower-middle class tier and cannot afford it.

This poor baby was undiagnosed for many months, despite his parents’ best efforts to get him treated

Shibil was an energetic baby who was growing normally until December 2016, when he turned a year old. One day, his mother, Sebina, noticed that his tummy had become unusually hard. The worried mother immediately took him to a doctor in their hometown of Calicut, Kerala, who said it was just gas and she had nothing to worry about. But over the days, both Shahul and Sebina noticed that their once-active son had become very lethargic; he had started eating lesser and lesser as days passed. He also started looking appearing very thin, with only his stomach bulging out. They knew something was wrong and from then started this family’s painful journey from hospital to hospital.


An old photo of Shibil

“We went to many hospitals in South India, but nobody could tell us what was wrong until a few months later last year. When we came to know about his severe liver disease, we were shocked. But we still had hope that he would be better with medicines; we were wrong. His condition just kept worsening.”-Shahul.

From the past one year, Shibil’s growth has been stunted as he is not able to eat nutritious food as he should. Therefore, he is only able to say the words ‘Uppa’ (father) and ‘Umma’ (mother) now, despite being 3 years old. Along with this, his whole body itches so much (as a symptom of liver failure) that he cannot help scratching himself until his skin bleeds, all day and night. Sometimes he wakes his parents up and asks them to help him scratch. When he is feeling a little better, all he does is watch cartoons, even though he too longs to jump and play outside like the neighbourhood children.

“The worst part is – his body is always hot – like he has a perpetual raging fever. Even in the coldest of rainy days, he has to sleep under 2 fans to cool his body down. But even that does not give him much respite.”-Sebina, mother.

Shahul used to earn his living as an auto rickshaw driver in Calicut itself before his son’s troubles started. He used to earn Rs 6,000 monthly, which was hardly enough to run his family – consisting of his wife, elderly mother and two sons. But now things have become much harder. This poor father has not been able to go to work at all and has no income. He is dependent on the mercy of near and dear ones from his hometown who have helped with some money to do routine tests ahead of the transplant. But that is not enough – the transplant that his son so desperately needs costs lakhs, while Shahul does not even have a few hundreds in his pocket.

Baby Shibil is suffering from a severe liver disease that has fully damaged his liver, which is now enlarged and pushing against his stomach and other vital organs. He can be saved with an urgent liver transplant that is completely out of the reach of his poor parents.

Thank you all for your wonderful support. We are very overwhelmed by the response we got for Shibil's campaign. We can take Shibil for the transplant as soon as possible. His transplant date will be informed at the next consultation with the team at the hospital.

We kindly request all of you to keep Shibil in your prayers. We will keep you posted on further developments.

Scan & donate with any app
check_circle_outline Download payment receipt
Report fundraiser
Know someone in need of funds for a medical emergency? Refer to us
Rs.59,683 raised

42 Supporters expand_more
This campaign has stopped and can no longer accept donations.
$150 Million +
Raised on Milaap
Are you in need of financial support for medical or personal emergencies, or a social cause?
Start a fundraiser
Or
Know someone in need of funds for a medical emergency? Refer to us
Campaign organizer contact_mail
M
Milaap
Beneficiary: Muhammed Shibil info_outline 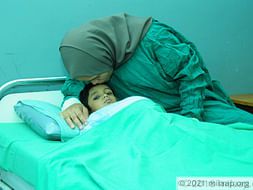