5-Year-Old’s Heart Is Rapidly Failing As You Read This, Needs Help | Milaap

5-Year-Old’s Heart Is Rapidly Failing As You Read This, Needs Help 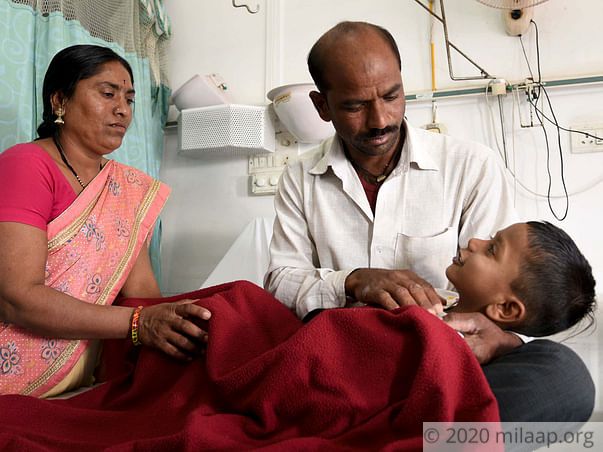 Every morning, Little Krushna springs out of bed when the neighbourhood pals kids call out to him, saying “Hey Krushna, aren’t you coming to play today also?” He washes his face and prepares to run to the front door when a piercing pain in his chest stops him. He starts gasping for air. He cannot walk any further. He quickly goes back to bed, saying nothing. His friends keep calling him, until his mother, Nyneshwari tells them that he is not feeling well, and will meet them later. Krushna quickly hugs his mother soon after, tears streaming down his eyes. “Will I never be able to play again?” he asks his helpless mother.

Krushna is aware that he is not healthy like before, but his parents have not told him that he suffers from a severe heart disease that has brought their lives to a standstill. “There is only one hope for him – a heart transplant,” says Nyneshwari, adding, “But we will never be able to afford it in this lifetime.”

This little boy’s laughter once echoed in the entire household, now it is replaced by his painful cries

1 month ago everything was different in Rambhau and Nyneshwari’s small home. Food and resources were less, but happiness was there in abundance. Their youngest son, Krushna’s mischievous antics would keep them on their feet all day.  Krushna was thoroughly pampered by his three elder sisters – they would give him the biggest share of any sweets they received and made it a point to get him up and ready for his Anganwadi classes in the morning even before they even bathed. But since last month, everything changed after Krushna developed a throbbing pain in his chest.

“He had stopped eating completely because of his pain. He would only cry all the time, asking us to take his pain away. We took him to many doctors in our area before he was diagnosed with a severe heart disease in a hospital in Pune. We were shocked knowing that he had been sick all along and that his heart is rapidly failing now, and wondered if it was too late,”-Rambhau, father.

A heart transplant can give Krushna a new lease of life

After his diagnosis, life has become morose for Krushna. An active child who used to love spending time outdoors, chasing cattle or playing with friends, is now so weak that he spends most of his time sleeping. “When he gets a little energy, he looks out the window and waves at his friends. He wants to go and play with them like before, but his breathing problems do not allow that,” says Nyneshwari.

Krushna is suffering from a deadly condition called dilated cardiomyopathy, where the heart is enlarged and cannot pump blood effectively. The doctors have told his parents that without an urgent heart transplant, their son will not live for more than 6 months.

Being poor farmers who have to beg others for even food sometimes, these parents cannot save their son

“Being a farmer means embracing the uncertainty of what lies ahead. If the crop survives, we get as little as Rs 5,000 a month and if it fails, we get nothing,” says Rambhau about his income. With great difficulty, they have spent more than Rs 60,000 on their son’s medicines and pre-transplant procedures. They do not have a paisa more to spend on food and essentials now, let alone Krushna’s expensive transplant. These parents are anxious about their child’s life, but are completely helpless.

Krushna was once an ever-smiling, happy child who loved nothing more than playing with his friends. He is the reason his poor parents and sisters smile through their poverty. They now risk losing him to a severe heart disease. Their poor finances are an obstacle to saving him.

UPI: rzpy.givetomlpmasterkr001@hdfcbank (Copy to clipboard)
Or
Click here to read the instructions before you make a bank transfer. 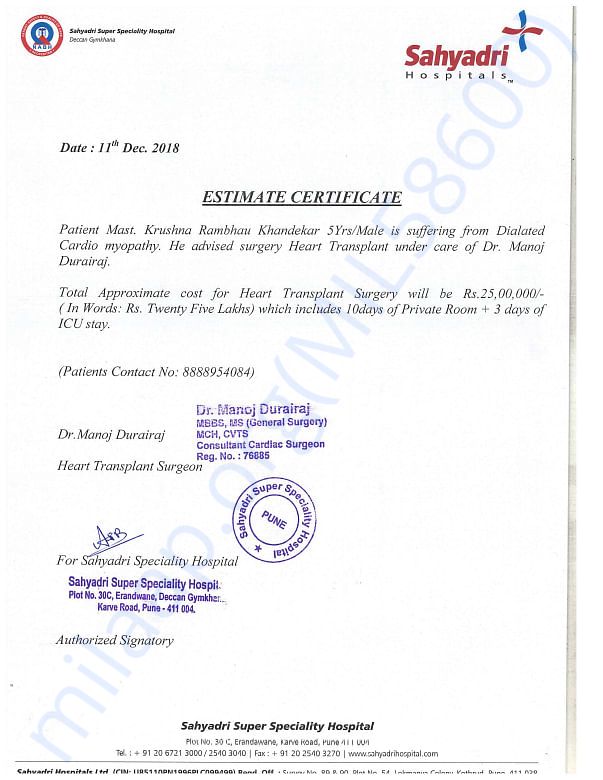 UPI: rzpy.givetomlpmasterkr001@hdfcbank (Copy to clipboard)
Or
Click here to read the instructions before you make a bank transfer.

Report fundraiser
See how thousands are crowdfunding for their causes on Milaap
Rs.16,963 raised 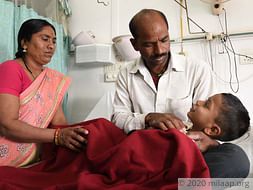 5-Year-Old’s Heart Is Rapidly Failing As You Read This, Needs Help