After Banks Rejected Loan Pleas, Electrician Struggles To Save His Son | Milaap
This campaign has stopped and can no longer accept donations.

After Banks Rejected Loan Pleas, Electrician Struggles To Save His Son 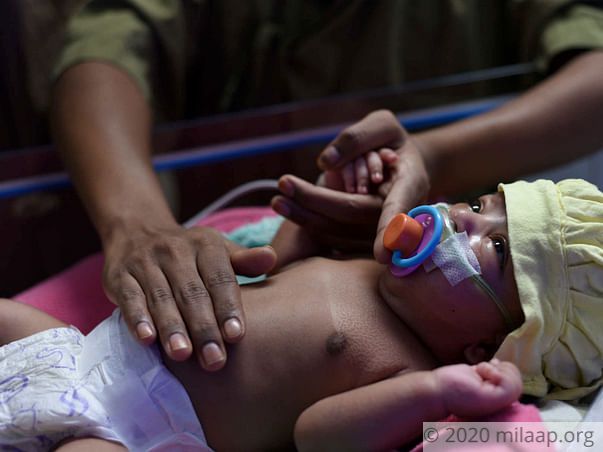 Ever since his newborn baby boy was hospitalized, Jitesh, a poor electrician, has been frantically applying for loans in banks, but to no avail. All his applications have been rejected with the same reason: his income is too less and he does not have any property to mortgage. The baby needs prolonged treatment in the intensive care unit to survive and the hospital bills are piling up every day, and Jitesh is struggling to find a way to keep his baby alive.


“Every time I see my baby, I feel guilty that I have not been able to arrange enough money for his treatment. Time is running out, but I am completely helpless.”-Jitesh.

Jitesh and his wife Vidhya lived a modest life in Mulshi, a village 40 km away from Pune. Their fairly dull and ordinary life suddenly became vibrant with new hope when Vidhya became pregnant. Jitesh started saving up more from whatever little he earned to make sure that he could take his wife for regular scans and tests. They prayed for nothing but a healthy baby. But within hours of his birth, their newborn baby boy’s whole body turned blue-black in colour and he had to be rushed to the NICU. The baby was diagnosed with Esophageal Atresia with Tracheoesophageal Fistula, a condition where the food pipe and windpipe are fused due to abnormalities in the formation of the food pipe. The baby had to be transferred to a private hospital immediately or he would lose his life. He underwent an emergency surgery on the next day.


Jitesh and Vidya, an old photo

“I had not even held him or breastfed him even once before he was taken away from me. The next I saw him, he was covered in tubes from head to toe. I have not seen what my son’s face really looks like yet – when they ask me if he looks more like his father or me, I say I don’t know."-Vidhya, tearfully.

The little fighter is still not out of danger, he needs 6 months of hospitalization to recover

Though his surgery was fairly successful, Jitesh and Vidhya’s baby has a long road of recovery ahead of him. He still is not able to breathe on his own and is on mechanical ventilator support. He is being fed milk through tubes only as he is too weak to even suckle. He will need to spend at least 6 months in intensive care to become better. His health is improving with every passing day and there is hope that he would grow up like any other normal baby, but money is the only hurdle that stands between this poor baby and his recovery.

Jitesh begged and borrowed to pay for his baby’s medicines, doesn’t have a paisa left

Jitesh used to earn a meagre Rs 8,000 working as an electrician in his hometown. As he was the sole breadwinner of a joint family consisting of his aged mother and brother, it was never enough for household expenses itself. He would find himself borrowing money every time someone got sick in the family. The money he had been saving up for his wife’s delivery was the only savings he had – but unfortunately for him, that did not suffice after his newborn was hospitalized. He borrowed money from friends and relatives to pay for his baby’s medicines, which amounted to more than Rs 2 lakhs. He has nothing left now and is in a lot of despair as no bank is giving him loans either.

“We don’t have money for even food. My uncle has been kind enough to send us food every day, knowing our pathetic condition. I am trying desperately to arrange money, but nothing is working out. I feel like I am drowning.”-Jitesh.

Jitesh and Vidhya’s baby boy is recovering in the NICU after an emergency surgery for his congenital condition. The baby needs prolonged hospitalization to survive, but Jitesh has not been able to get a bank loan after repeated efforts. He is struggling without hope. 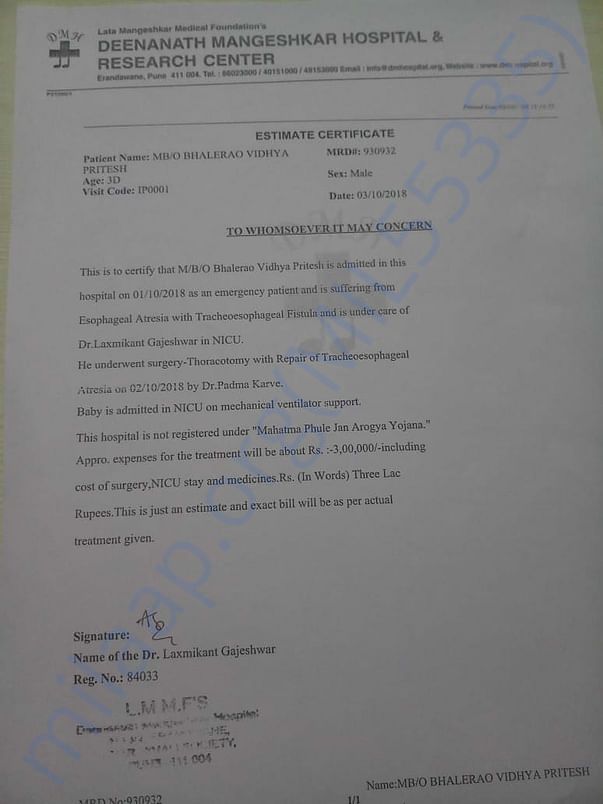 Baby of Bhalerao is no more with us. Baby was undergoing his treatment but his health deteriorated due to ENT disease and he couldn't make it.

Report fundraiser
See how thousands are crowdfunding for their causes on Milaap
Rs.226,651 raised

SG
You are sending a message to
Santosh Gorgal
Go back 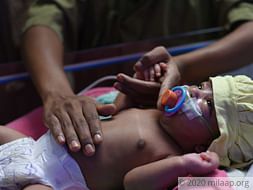 After Banks Rejected Loan Pleas, Electrician Struggles To Save His Son