Boy Who Swallowed A Small Speaker Is Fighting To Live In The ICU | Milaap
This campaign has stopped and can no longer accept donations. 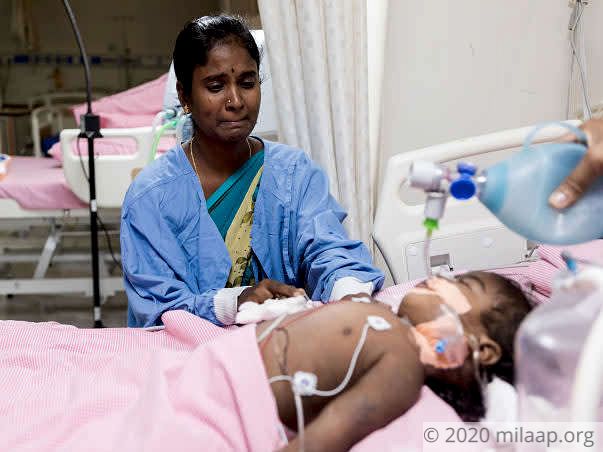 “It is always scary when your child accidentally swallows something. When Sai swallowed that tiny speaker, we immediately took him to the ENT specialist. But even after removing it, his throat continued to swell and we were asked not to feed him any milk because his throat was too inflamed.”

Sai Srujan is the 8-month-old son of Narasimha and Lakshmi. Like most babies his age, he loved playing with toys. One of his toys was broken and while playing with it, the speaker came apart. Before his mother could get it out of his hand, he had swallowed it. It got lodged in his throat and he started crying immediately out of pain.

"Without wasting a minute, we took him to the ENT specialist near their house. The doctor removed the speaker from his throat and prescribed some medicines for the inflammation. Sai’s throat started swelling and he struggled to breathe. Again, we went to another hospital where he stayed for 2 days until the doctor told us what was wrong."

After running tests they found out that he had pneumonia

Sai was diagnosed with pneumonia and the doctors advised his parents to take him to a bigger hospital, where he would have access to better treatment. Narasimha admitted his son to Rainbow hospital, where he is being currently treated.

“I took him to a bigger hospital, and when the doctor was giving him an injection, he started coughing and didn’t stop. Within minutes the coughing got so bad that he couldn’t even breathe anymore. That is when the doctors told us that he would need the PICU.”

Sai was struggling and gasping for breath

Since then he has been on ventilator and his condition is worsening with each passing day. He still can’t breastfeed and depends on IV tubes for his nutrition and medication. Lakshmi is always waiting for visiting hours so that she can see her son. Whenever she goes near him, she breaks down, seeing him in that state.

“Had he not swallowed that thing, we would have never known he had pneumonia till it got too late. I’m relieved that he is getting medical attention, but his condition just keeps getting worse.”

He is hardly ever conscious and they cannot afford treatment now

Pneumonia has weakened Sai so badly that he is hardly ever awake. Sometimes to check if he is conscious or not, the doctors and nurses have to pinch his skin slightly. Even then, he is too weak to fully open his eyes, he only half opens them for a moment before closing them and drifting off.

Narasimha and Lakshmi haven’t had a single night’s sleep since their baby fell sick. They are doing everything they can to get him the treatment he needs but they have no money left to pay the hospital bills anymore.

Daily expenses at the hospital come to about Rs 30,000 a day, which is more than thrice of what Narasimha earns in a month. Since Sai has been hospitalised, Narasimha and Lakshmi have been staying there, always in the waiting hall.

"Our 3-year-old daughter, Laasya has to wait in the hospital waiting room with us because there is nobody else who will take care of her or help us."

Narasimha works as a cab driver and makes barely enough money to keep the household afloat. His wife is a homemaker and within the limited income he brings home, they manage hand to mouth. They have already spent over Rs 2 lakhs towards his treatment, by borrowing money from friends and relatives, but now they have nothing left. Your contributions can help save little Sai and give Narasimha and Lakshmi their son back. 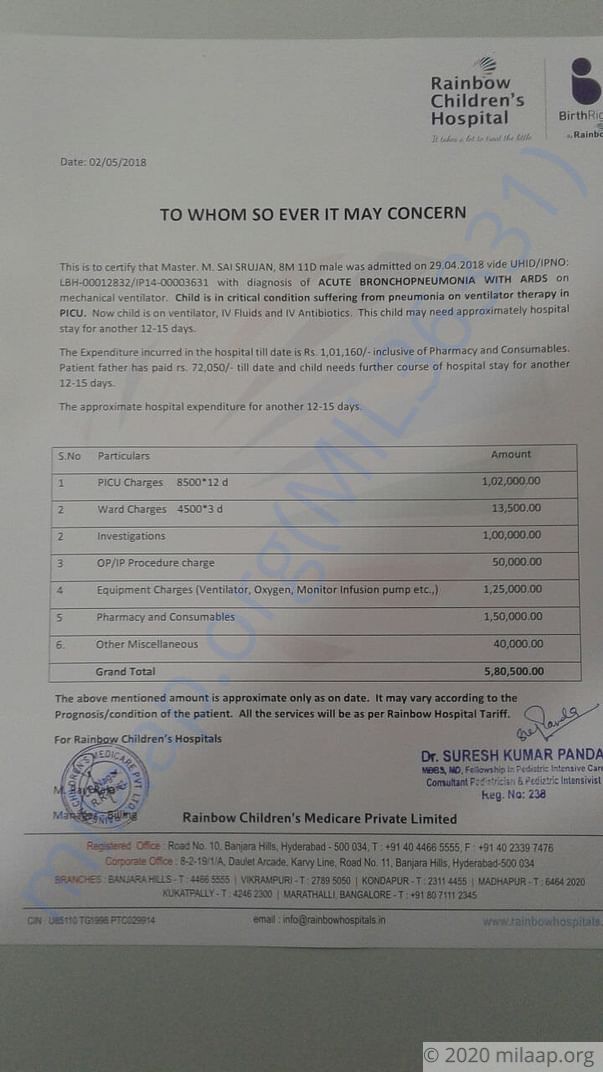 The baby passed away on 6th May, 2018 around 4PM. His health was deteriorating with each hour he spent in the ICU, the baby was on the ventilator support and was given the best of treatment by the doctors.

Despite all the efforts, the baby could not recover as his body was too weak.

We are grateful to all of you who showed selfless support towards the baby. Withdrawn funds will be utilized to settle down the medical expenses incurred during the treatment.

Scan & donate with any app
check_circle_outline Download payment receipt
Report fundraiser
See how thousands are crowdfunding for their causes on Milaap
Rs.139,605 raised

You are sending a message to
Suresh Kumar panda
Go back 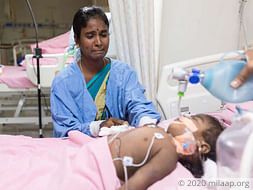