Teenager Wonders What He Did Wrong To Deserve Cancer | Milaap

Teenager Wonders What He Did Wrong To Deserve Cancer 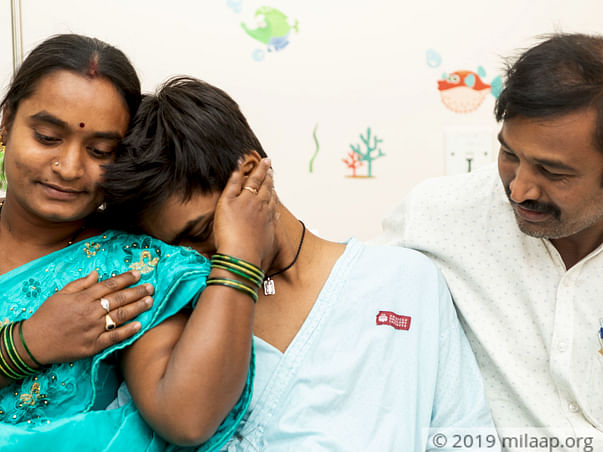 Last week, before his first chemo session, 16-year-old Akash asked his parents – ‘Nanna, Amma, I have always been an obedient boy. I have never done anything against your wishes. I never even used to go to play outside every day like my other friends. Why did this have to happen to me? What did I do to deserve this?’

Navaneetha and Srinivasulu wanted to burst out crying, but instead they kept their cool and even faked a smile in front of him. In the next few days post chemotherapy, they saw their son going through hell. He was vomiting, had body pain and couldn’t even move from the bed. Weakness was taking over him, and these parents could do nothing but watch helplessly. Now they also wonder if they will able to continue his treatment as their funds are quickly getting over.

‘Will I ever get my black belt?’

Akash has been learning Wushu or Chinese Kung Fu for years. He has won many tournaments also so far. His aim was always the black belt, and he relentlessly worked hard in order to achieve it one day. Last year, he was supposed to get it but unfortunately he got chicken pox and couldn’t attend the deciding tournament. And this year, in January he was down with fever and he even got lumps in his neck. Unfortunately, it turned out to be cancer. His dreams of donning a prestigious black belt remain unfulfilled, along with his desire to write the annual 11th grade exams.

“We believed that these lumps were harmless at first – even Akash thought that those were due to infection. When the doctor said ‘cancer’, Akash looked at him and asked if he can still write his annual exams and go for his Wushu tournament. He begged him, in fact. But the doctor said no and his heart was broken,”-Srinivasulu, father

Akash and his sister Indu (15) are inseparable. From fighting for the TV remote to running around the house like kids, these two siblings have a lot of fun every day at home. Their laughter used to brighten up their parents’ lives. After learning of her brother’s illness, Indu hasn’t left his side even for a moment. Her annual exams are going on, but she still prefers to spend time with her brother – whether he is in hospital or at home. Akash, in turn, helps her revise the subjects she finds most difficult, Maths and Science.


“His body hurts all over, but he doesn’t bother about that. He wants his sister to score the top marks in class. He strains his eyes a lot and sits in one position for hours altogether – but he does not listen. Even when he’s suffering, he can only think about others, my poor son,”-Navaneetha, mother

Unemployed for the past 6 months, this father needs your help to save his son

Always worried about his children’s education, Srinivasulu quit his job 6 months back in order to find a better-paying job. He wanted to make sure that he is able to pay for his children’s college fees as both of them were bright and aimed to get into professional colleges. But he hasn’t been able to find a job so far and has taken to doing odd jobs for a living. His wife, Navaneetha does tailoring to make sure that her kids don’t go to bed hungry. The family was already going through so much when Akash was diagnosed with cancer. They borrowed a lumpsum from relatives to get him started on his first round of chemotherapy last month. Now, they have nothing to continue his treatment.


“His next chemo session falls on the 26nd of this month. We don’t have money to pay for it. I don’t know whom to ask – I have already begged everybody I know and nothing has come so far. Please help us,”-Srinivasulu

With your kind contribution, this bright young boy can undergo his treatment properly and get a second shot at life. 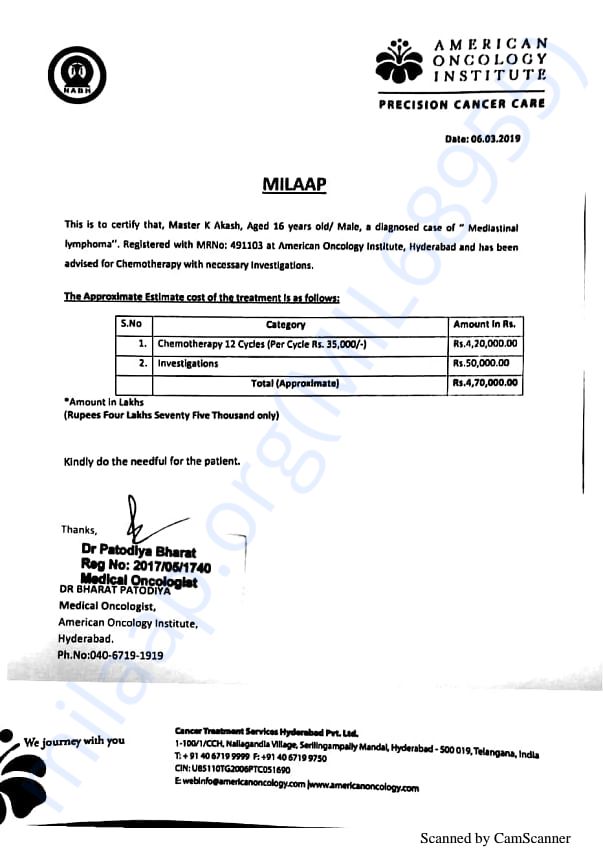 Scan & donate with any app
check_circle_outline Download payment receipt
Report fundraiser
Know someone in need of funds for a medical emergency? Refer to us
Rs.16,510 raised 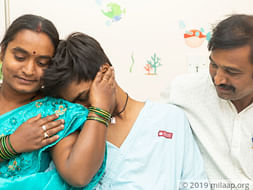 Teenager Wonders What He Did Wrong To Deserve Cancer