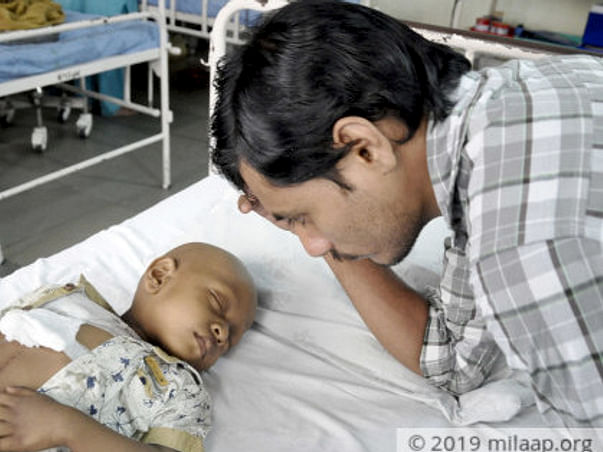 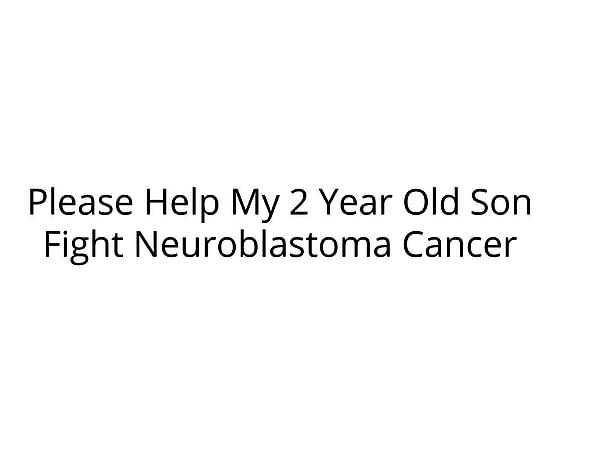 Previous Next
Alvin is only 2-years-old and has stage 4 cancer. As you read this, he’s undergoing painful chemotherapy. The tumour that started near his kidney has now spread to his spine and brain. He’s in the hospital every 15 days, and when he’s not asleep due to exhaustion, he’s crying. Alvin is running out of time. His father, Naveen, is a food delivery man in Bangalore. The only time he can go for work is when Alvin is not in the hospital. And those days are rare now. Naveen and Rani are shattered and helpless – they see no other way to save their son from this disease.

Nearly 5 months ago, the ever-smiling baby Alvin fell sick. Within a week, he was in the hospital for fever and leg pain. On his 2nd birthday in October, Alvin was discharged. It was a small celebration that day – with cake and candles – and it was Naveen and Rani’s last celebration. A few weeks later, his fever returned. Alvin was diagnosed with neuroblastoma – a type of cancer that forms in certain types of nerve tissues. It’s most often found in the small glands on top of the kidneys. It can develop in the stomach, chest, or spine.


“It was already at stage 4 when we found out. That means for months, our baby was living with cancer and we didn’t even know. He showed no symptoms until 5 months ago. Yes, he fell sick every now and then. But it was just a mild fever. Cancer crept into our lives so quietly.” – Naveen, father

Naveen, the sole breadwinner, was forced to quit his previous job to take care of Alvin

One month after his diagnosis, Naveen had to quit his job as a graphic designer in a small company because he had been on leave for too long in order to be with Alvin. He then joined Swiggy as a delivery executive due to the flexible work days.


“I go for work only when we’re at home. Both of us have to stay in the hospital with him. I have to run around for the tests, medicines and food. And my wife can’t leave his side. I had no option but start working as a delivery executive. This way I can be with my son in the hospital and work on the days I’m not. But that doesn’t leave me with much.”

Unfortunately, Naveen didn’t have family insurance when his son was diagnosed. He got one only after he joined Swiggy, so the 3.5 lakhs he’s spent till now has been out of his savings and by borrowing from relatives.

Alvin’s cancer can spread and kill him without timely treatment

Alvin’s fight continues. The little one had just started to say ‘dada' and ‘oota’ (food in Kannada). He was growing, like any other child, before cancer appeared unannounced. He has completed 5 cycles of chemotherapy and needs one more before he has surgery to remove the tumour near his kidney. He also needs a bone marrow transplant to survive. Naveen doesn’t have the means to save his son. Because of the number of days he can work, he earns around Rs. 6000-7000 per month, an amount that barely covers even his medicines. Alvin needs your help.

“He’s very critical. The cancer can spread and kill him without treatment. We can’t save our only child without your help.” – Naveen

Your support will save Alvin from this aggressive cancer and give him the childhood he deserves.

UPI: rzpy.givetomlpalvin000001@hdfcbank (Copy to clipboard)
Or
Click here to read the instructions before you make a bank transfer. 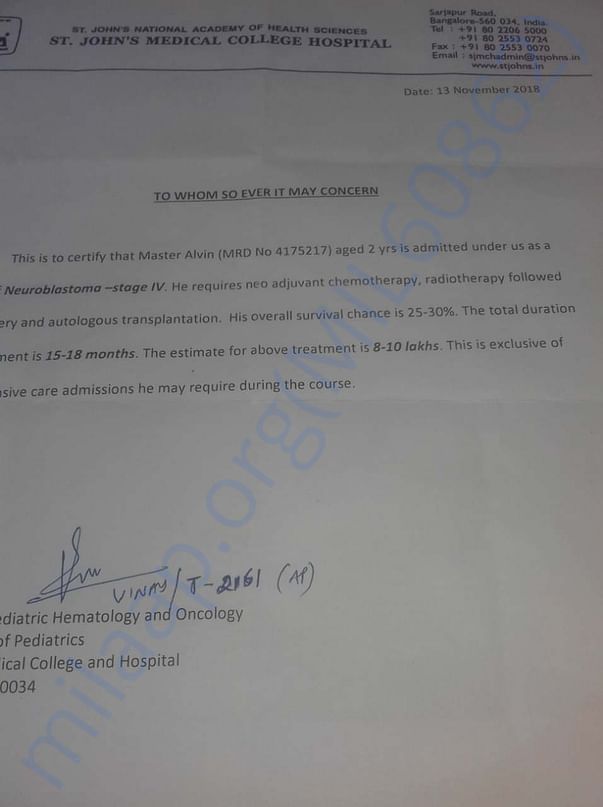 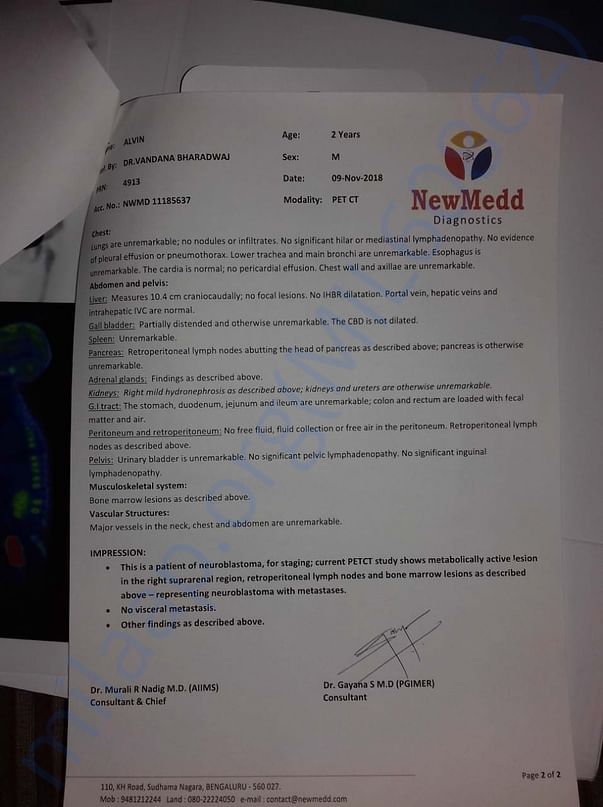 UPI: rzpy.givetomlpalvin000001@hdfcbank (Copy to clipboard)
Or
Click here to read the instructions before you make a bank transfer.

Thanks for all your blessing and donations.

Chemotherapy and Bone-marrow transplant surgery is completed successfully.  He is recovering, and is stable now. He is showing all postive results.

Further treatment of Radiation is pending, which will happen on the last week of June.

Thank you for all the support once again!

Alvin's first surgery is over and now Autologous stem transplant is under process, later bone marrow transplant, surgery will be scheduled.

We will keep you posted!

Thanks for all the support!
Load more
Donate
Report fundraiser
See how thousands are crowdfunding for their causes on Milaap
Rs.802,110 raised

god bless you son. he will be fine.

god bless you son. he will be fine.

NP
You are sending a message to
Naveen Prasad
Go back 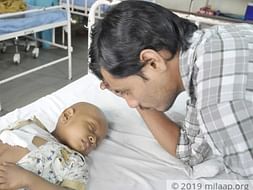