Help These Indian students crowdfund to remove one zero from the 300 million homes without electricity in India | Milaap
loans added to your basket
Total : 0
Pay Now

Shares
Shares
Share on whatsapp
School summer vacations are a time when anything can happen. It was a three-month long break after the pressures of class 10 for Dharam Vir, Akhil, Nalini, Dharamendar and Shailender. It was also the first time these students from Mysore 'lit-up' a village.
Dharam Vir (third from left) with the Bangalore YUVA team
“We were in Akhil's village-Kenya, in Puttur, Karnataka. The first day, at sunset, I asked them if I could switch on the lights and they all laughed at me,” recalls Dharam Vir. It was the kids' first time in a village and this stay was their dramatic introduction to challenges in remote India. They heard stories of studying by a lamp, of kerosene fumes hurting lungs, and of snakes getting into homes and biting children in the dark.
But this was the group from Kendriya Vidyalaya, Mysore, that had made a solar bicycle for their annual national science exhibition. “It was the most simple thing that I took for granted. These people have lived like this for years. We felt that we could fix something this basic,” Dharam Vir says.
Akhil on a roof installing the solar panel
They went back, consulted an uncle in the know and two weeks later used their solar panel to install an LED bulb in one home. They promised they would come back for the rest of the village and they did. They collected funds from the public to light up all 30 houses in Kenya. This was the summer vacation of 2012.

Engineering college opened their eyes to a new world. “We had friends from all economic classes in school. But in college, most people tended to be well off and quite unaware of how the 'other' lived,” explains Dharam Vir about coming to college.
The team assembling a solar kit
Having spent the last two years setting up solar-powered lamps in off-grid areas, they started a volunteering group to share the experience with others. “What you do when you are 18-22 decides who you become. Our volunteering group is for people in this crucial stage of their lives,” says Dharam Vir, who is now in the final year of engineering.
The group became Youth United for a Vision to Acheive (YUVA) and today it is a team of 93. Not all volunteer full-time. “We are students and many don't get permissions from parents to go out of town or come very often. So they join as non-permanent members and help us with other things like promotions, outreach etc,” says Dharam Vir, the President of YUVA.
Crowdfunding India, Milaap is India's largest crowdfunding platform for social, personal and medical causes.

YUVA has 10 people in the core team, 72 permanent members and 9 non-permanent volunteers. It became a registered trust in 2013. The group has its math worked out and one goal chalked out – to reduce a zero in the300 million homes without electricity in India. They call it the 'Light Up Revolution'. They have lit up 219 homes in Karnataka so far.
The YUVA team

They assemble their own solar-powered kit consisting of a solar panel that powers a battery that in turn lights a 4 watt LED bulb. The kit ensures minimum 4 hours of light per unit, depending on the brightness of the sun. A local person is trained to troubleshoot and contact YUVA in case of any problems.
Each kit costs Rs 3,204 and YUVA's fundraising efforts are aimed at adding one more kit for installation. For the next phase, they have identified 786 homes to light up in Joida – a remote village in the Western Ghats. The plan is to light up 21 villages in 21 hours.
It is truly the brave who can believe in a dream so grand. These youngsters want to make a more beautiful world where many more enjoy the luxury of lights after dark. Where many more homes trade in a kerosene lamp for clean energy.
Click here to be apart of YUVA's vision and donate to Mission Joida.
Donate 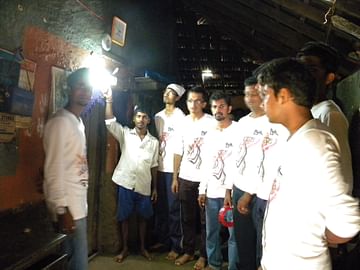 Help YUVA light up a house