Shares
Shares
Share on whatsapp
I met Vanlalhlimchhani in her small house in Luangmual village which was about an hour’s drive from Aizawl town in Mizoram, to the north-east of India. Her group, Mahlimi Group-21, just completed their Milaap loan cycle in March this year. They had borrowed a Milaap loan last year to invest in different businesses, like piggery, poultry, selling fish, and running a grocery store.
Vanlalhlimchhani invested the Rs.20,000 she had borrowed from Milaap lenders in the small poultry unit she had outside her house. Unfortunately, she was unable to look after the chickens and decided to sell them off within three months of taking the loan. The chicken had grown by then and fetched her good money. She then decided to buy pigs and give them off to her relatives in the nearby area who had enough space to rear them. Vanlalhlimchhani adds that it was difficult for her to take care of the chickens or the pigs because she was busy with her young kids. . She is six months pregnant, and also has a son, who is four years old, and a daughter, who is seven. Her husband works for the Mizoram Police and also runs a carpentry business near their house. The poultry and piggery business added a little extra to their family income. I ask her if she would take a second loan to buy more pigs or take up some other business. She promptly replies, that with a new baby on its way, she won’t be able to run a business actively, and would rather take care of her family.  Her clarity of thought delighted me. 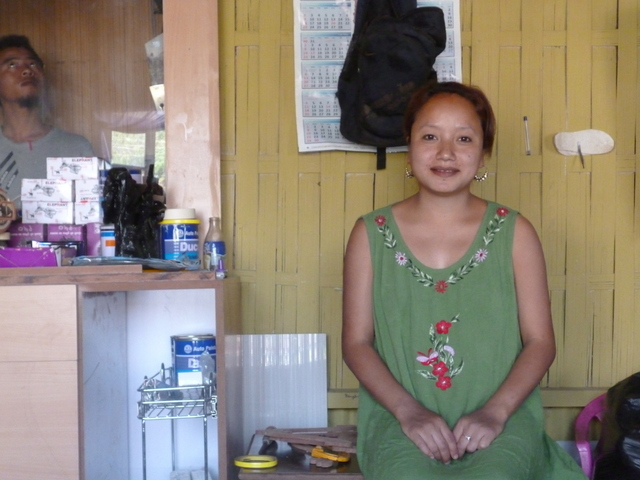 Vanlalhlimchhani posing for the camera