You are sending a message to
Amey Sawant
Go back

What helps girl stay in School?

By Maanushi Rana
01 August, 2017
Shares
Share on Whatsapp
By educating girls, we reduce poverty, improve maternal and child health, prevent HIV and AIDS, and raise living standards for everyone, says Yallapam sir. Despite the overwhelming evidence of the benefits of girls’ education, however, many school-age girls around the taulka and in the taluka are not in class.
Factors such as poverty and distance from schools limit access to education, but even in situations where all children face such barriers, a gender disparity is evident!
In Raybag, among the socially marginalized groups designated as scheduled castes (SC) and scheduled tribes (ST), approximately 76% of SC and 81% of ST girls, as compared to 47% of SC and 61% of ST boys, do not complete secondary school; this is what the survey says.

A program called Every Child Project aims to understand and overcome some of the reasons for this unequal access and aganwadi teaching systems. Collaboration between MASS and the Jan Shakti Organisation at Raybagh Taluka, Karnatak, EveryChild Project is both a research study and a program to support girls from SC/ST communities to delay marriage and avoid entry into sex work by continuing in high school.

Every Child project was a small initiative started by an international forum in 2006 which ultimately ended in 2015. Determined by the words of Modiji, founders of Jan Shakti Organisation and MASS continued the programme and introduced new themes of educating the girl child. As we refer to it today as ‘Beti Bachao, Beti Padhao”. “Nayi Sarkar ladki ko padhna chahti hai madam toh hum bhi wahi karenge” says the cheerful smile of Yallapam Sir.

Extra programmes for the girl child in rural India have been included because the government wants to improve the socio-economic status of the women in rural areas through awareness. The anganwadi teaching system prevails the vertices of Raybag; various fields and aspects of life such as art, culture, folktales take place every day from 17:00hrs- 19:00hrs.In some of my exploratory studies, project researchers have interviewed adolescent girls, their parents and their teachers to document the hurdles and also enabling factors affecting girls’ education in Raybag taluka, Karnataka. I also learned that girls are expected to care for their younger siblings, do the household chores and often also provide financial support through manual labour or sex work.
Lack of adequate facilities; poor quality of teaching and not to forget physical abuse by teachers all discourage girls from attending school. From my personal interviews with many girls and  some of the parents, it is clear that many of the girls themselves do not value school and are influenced by peers who have dropped out and got married. Added to this is a pervasive normative pressure to marry girls early.

Students transition into secondary school around the time when girls reach puberty – the age at which parents fear that their daughters will experience ‘eve-teasing’ (sexual teasing) on their way to school or become involved in romantic relationships. The risk of a ‘bad reputation’ – together with family reliance on girls’ domestic labour and their earnings outside the home – encourages parents to withdraw girls at this crucial point in their schooling.This offers a good example of social and gender norms at work: Evidence of the benefits of education are unlikely to sway parents if they believe that everyone else in their community sees early marriage, for example, as the best way to ensure a daughter’s safety and future.

The JanShakti Organisation and MASS collaborate on such adversities to help educate the young girl child in merely two hours.  This kind of education is not formal but helps in rendering and escaping the harsh reality of the many girls living in Raybag waiting for a groom to strangulate their dreams. 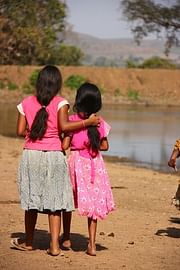