Was your wallet made by Milaap borrower Ambiya? | Milaap

Was your wallet made by Milaap borrower Ambiya?

Shares
Shares
Share on whatsapp
Most Milaap group borrowers of solar lamps in rural West Bengal are artisans (often specialising in juri work), tailors and tea stall owners.  But this group, whose group leader is Anjuyara Molla, binds wallets for a living.
However, I was unable to meet Anjuyara when I visited their borrowing group's meeting on 26th February, as she was not present. But while interviewing the group's members, I was able to get a particularly interesting story from one of them, Ambiya Laskar.
Ambiya and her husband, who also binds wallets, feel that their lives have dramatically improved since she borrowed a Milaap loan to buy a solar lamp.
Before buying a solar lamp, Ambiya was unable to pursue her wallet binding at night whenever daily power cuts happened. Both she and her husband would often sit idle. They knew that if they had uninterrupted electricity access, they could have bound more wallets in order to earn more money. Their only lighting substitute, a kerosene lamp, was useless. The lighting from the kerosene lamp was too dim to work under. It was quite useful as a torch when walking around at night. It additionally served as lighting for their 3 school-attending children (2 sons and 1 daughter) when they studied beside it at night. However, the kerosene lamp posed the same dangers to Ambiya’s family as other kerosene lamps have to other Milaap borrowers. She used to worry about her body getting burnt by any kerosene oil spill when she and her family walked around with it as a torch. Such oil spills also occasionally burnt her children’s hands when they were studying under the same lamp, another disheartening occurrence for her. 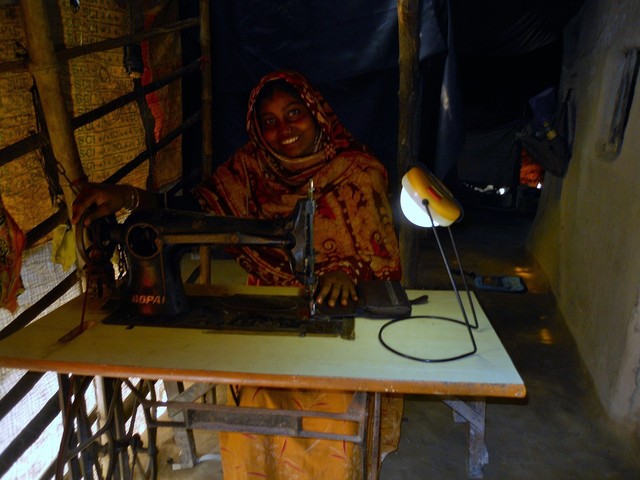 Ambiya binding a wallet under her Milaap-funded solar lamp
Thankfully, these issues have withered away ever since Ambiya and her family started using her Milaap-financed solar lamp. The solar lamp’s uninterrupted bright lighting has enabled Ambiya and her husband to bind wallets at night during power cuts. In Ambiya’s case, her wallet binding productivity has increased from 3 to 4 pieces a day to 5 to 6 pieces a day. Her average monthly income has now increased by Rs. 500, from Rs. 4500 to Rs. 5000. At the same time, her solar lamp permits her children to study properly at night, while being a reliable torch for the whole family; no longer facing any of the mentioned issues associated with their old kerosene lamp.
Help other women like Ambiya build a life for themselves.