Her Husband Abandoned Her Because She Couldn't Conceive, Now She Is Struggling To Save Her Premature Born Twins | Milaap
loans added to your basket
Total : 0
Pay Now

Her Husband Abandoned Her Because She Couldn't Conceive, Now She Is Struggling To Save Her Premature Born Twins

“Not one person has come forward to help us. They act as if they don’t even hear us. People keep saying our family is cursed. It is heart-wrenching to hear such things. They are babies. They are struggling for life. My sister has suffered enough. When will this suffering end?”

She tried to have a child for 10 years. Her husband left her because she could not conceive. A few weeks later, Parameshwari discovered she was pregnant. Unfortunately, her husband did not believe her, not even when he heard she had twins, born prematurely. Now, these newborns are fighting to survive, and they need more than just emotional support to make it.
Parameshwari lives with her parents, brothers, and sister-in-law. Her older brother Manivannan has been caring for her ever since she was ousted from her in-laws' place because she could not conceive. Along with his father and younger brother, he earns around Rs. 18,000 per month to take care of the household. Although he has been married for nearly 10 years, he does not have children.

“I guess, my plight has also been the reason for Parameshwari’s fate. Her husband’s family keeps saying we are cursed and that is the reason none of us cannot have children. They had a misunderstanding and sent her away. She got pregnant, but they refused to believe saying she does not look pregnant. Even after the baby girls were born, her husband has not come once to see them. Now, again they say we are cursed and that is affecting the children.”

In her 7th month, Manivannan took Parameshwari for a scan. The doctor advised her to immediately get admitted into the hospital because she had low levels of amniotic fluids. Soon after she was admitted, Parameshwari’s water broke and she began to suffer from labor pains. Although they tried to control with medication, it was too late to do anything, and the babies had to be delivered.

“When they were born, they were both underweight. The doctor said one of the babies’ lungs were underdeveloped (diagnosed with respiratory failure with sepsis and bilateral Severe Intracranial hemorrhage). They were moved into the incubator, and one of them was on the ventilator. Both of them have to stay in the hospital for a few weeks until they gain weight and can get stronger.”

Manivannan has already spent over Rs. 4 Lakhs on the medical expenses for the newborn twins and his sister. Parameshwari’s husband or her in-laws have not paid a visit and refuse to support her through this difficult time. In fact, all of their friends and relatives, blame the family’s bad luck for the state they are in and do not want to be associated. Manivannan is doing everything he can to save these children, but he needs your support.
The treatment expenses for both children for the next 14 weeks are estimated to amount to Rs. 13 lakhs. Manivannan is already deep in debt and cannot afford to pay this amount.
Help this family through a terrible time in life, and save these miraculous newborn twins from pain.
Supporting Documents
The specifics of this case have been verified by the medical team at the concerned hospital. For any clarification on the treatment or associated costs, contact the campaign organizer or the medical team.
Click here to help save the Twins of Parameshwari or for more details on this campaign.
Donate 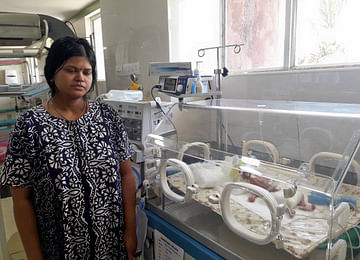 Parameshwari does not have much financial support to keep her newborns on ventilator.