3-Year-Old Theepak Lost His Right Kidney Due To Cancer. Without Immediate Help, He Might Lose His Life | Milaap
loans added to your basket
Total : 0
Pay Now

AH
You are sending a message to
Archana Harish
Go back

3-Year-Old Theepak Lost His Right Kidney Due To Cancer. Without Immediate Help, He Might Lose His Life

“We always have to be very careful of his surroundings. He has a high risk of catching infections and that’s why we impose so many restrictions on him. It breaks our heart to confine him this way, but what else can we do?” - Arul, Theepak’s mother.

Every 3-year-old child is full of energy and loves to run around and play. But Theepak’s case is different. He can’t do so even if he desperately wants to since even the slightest of contaminations can infect him and prove fatal to his life. It wasn’t always this way though, but in December last year, he got diagnosed with Wilma’s Tumour - a cancerous tumor - in his right kidney and since then his life took a turn for the worse.

They thought it was just an infection

Theepak, the 3-year-old son of Arul and Ramachandran, was a playful and active child till he turned 2. But soon after that, he started having minor health complications in forms of low to high-grade fevers. During Diwali last year, his mother noticed traces of blood in his urine and without any delay took him to a doctor. What followed was beyond their imagination.

Suspecting an infection, the doctor prescribed him medicines. His parents thought he would get better, but in December, his grandmother came visiting and noticed a swelling in his stomach, on the right side. He was taken to the hospital again, whereupon running tests, he was diagnosed with Wilma’s tumor. His treatment started right away. The doctors suggested a surgery for removing the tumor, but the tumor had affected his entire kidney and had to be removed. Now he needs chemotherapy to control cancer from spreading to his left kidney.

Theepak needs at least 20 sessions of chemotherapy, and he has been through 6 so far. The treatment is painful and he cries out because he can’t tolerate the pain. It makes him irritated and he is always gloomy. It is unfair that a little child of 3, suffer through so much pain.

Theepak has to stay indoors due to the risk of infections

Due to his condition, Theepak is extremely prone to infections and contaminations. His bed and surroundings need to be thoroughly cleaned every morning and night to ensure that nothing infects him. Not just that, owing to the risk of infections, he cannot go outside at all. His life is confined to the four walls of his house and this confinement agitates him even more. Going to the hospital makes Theepak extremely anxious and he keeps crying because he is exhausted with all the treatment he has to endure.

He has an elder brother, Karthik, who is 5 years old. Arul and Ramachandran are so scared of Theepak catching an infection that they sent Karthik to live with his grandmother. Karthik really misses his family and especially his little brother. Their parents are doing everything they can, to save Theepak, but the financial state comes in the way of his treatment.

Ramachandran works as a laborer in a factory that manufactures truck parts, in Hosur. He makes Rs 300 a day, but he is unable to attend work every day since he has to take Theepak to the hospital in Bengaluru frequently. In order to compensate and bring money home, he goes to work on Sundays as well. But despite all the efforts he puts in, his income is still insufficient, and he can’t afford the expensive treatment that Theepak needs. So far he has paid for Theepak’s treatment by borrowing money from his friends and relatives. But now he has run out of money and can’t pay the bills anymore.

His poverty shouldn’t decide the fate of little Theepak. In order to save him, Arul and Ramachandran need your support. By donating for his treatment, you can give Theepak a second chance at life. 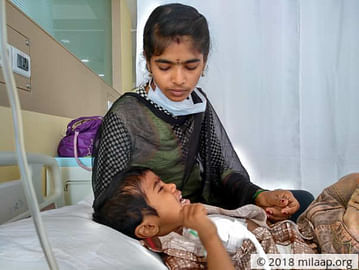 Theeepak's right kidney had to be removed due to a severe form of cancer called  Wilma's Tumor.

UPI: givetomlptheepak@yesbankltd (Copy to clipboard)
Or
Click here to read the instructions before you make a bank transfer.