This 13-Year-Old Feels That He Can Beat Cancer Unaware That His Parents Cannot Afford Treatment | Milaap
loans added to your basket
Total : 0
Pay Now

“When sometimes we can’t stop ourselves from crying in front of Tafsir, he ends up comforting us. He tells us that he’ll get out of the hospital and go to school and play with his sister. He says he’ll win over the deadly disease. But I can’t tell him that in spite of his strong will to live, I might fail to save him.”

They had no knowledge of cancer, all they knew was they had to save Tafsir

Mehdi and Tasrima have been running to the hospitals since 2011 and they feel it’s a never-ending loop now. 12-year-old Tafsir instills hope and faith in his parents that he’s going to live. But after all these years, Mehdi has very little hope to save his son.

“In 2011, my son’s body used to burn up every day, he would shiver all the time. Such a young boy carried his school bag with so much difficulty. It was a pain to see him that way every day. After several tests, we found out that he has acute lymphoblastic leukemia, a severe form of blood cancer. We had no idea about cancer apart from the fact that it kills. Tasrima and I could feel our hearts on our palms, but we were determined to save him.”

Tafsir underwent 5 years of rigorous chemotherapy. The parents were told that if cancer doesn’t return for 3 years, he will be cancer-free. Mehdi and Tasrima skipped meals to invest more on healthy food for their son. Even after being extra cautious, after living medicine-free life for 18 months, his blood cancer came back crushing the little child yet again. Since last December, he developed blood-clots, rashes and his fevers kept coming back. Now only a bone marrow transplant can save him.


“For any parent, it’s difficult to tell their child that he has cancer. I was very skeptical of letting Tafsir know of his condition. He used to keep asking me ‘Abbu why are you crying so much? Why am I going to the hospital so often?’ Months later, he got to know of his condition and he was way stronger than Tasrima or me.”

Tafsir’s failing condition has left his mother in pain

Tafsir’s little body has tolerated all kinds of pain. His platelet count is 13, 000 (1,50,000 is normal) and his hemoglobin is 8.5 (13.5 is normal). When he started taking chemotherapy again, he caught a liver infection and was in the hospital for 19 days. He was in pain and begged his Ammi to take him home. But nothing could break his strong will to stay alive.


“Earlier Tasrima didn’t cry in front of Tafsir. But going by our condition, we are not even sure if we can keep our son alive. Now, Tasrima often breaks down in front of him. Even if we talk about Tafsir in our daily conversations, her eyes become wet. She chokes over food because she is constantly thinking about him.”

Mehdi has a tailoring shop. After paying the salary of his employees, he would barely have anything left for the family apart from the daily needs. He has never been able to save anything. The parents are struggling every day to see their son every day because they are scared that he might not even wake up one day.


“I am a man who just earns the bare minimum to sustain a family. I have already spent Rs 8 lakhs. When I came to the hospital this time, I borrowed Rs 2.5 lakhs. My father-in-law has sold his land to give us money to sustain. Without my relatives, I wouldn’t have been able to proceed with Tafsir’s treatment. Now even they have exhausted their money. My son believes that he can beat cancer, but I can’t tell him that I have no money and he might not live long.”

12-year-old Tafsir’s blood cancer has relapsed after 18 months. His father Mehdi has not just spent what he had but has also borrowed a lot of money from all his relatives. Tafsir needs an urgent bone marrow transplant to stay alive which will cost Rs 15 lakhs and the parents can in no way arrange the funds to save him.

Your support can save Tafsir 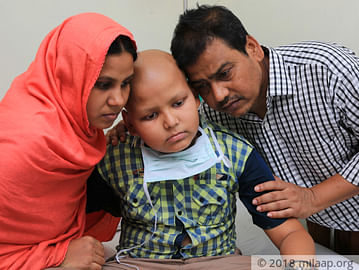 Tasfir Has Won Against Cancer Before, This Time However, Money Stands In The Way

Tafsir's has a very strong urge to beat cancer and live. But his parents have no means left to...