15-year-old Fears Death Every Moment Due To Multiple Heart Defects That Can Kill Him Without An Urgent Surgery | Milaap
loans added to your basket
Total : 0
Pay Now

"I can see him going through so much pain, even walking a few steps makes him breathe rapidly. He is losing weight drastically but he manages to smile in our presence while still fighting back his tears. Doctors have told that we can't delay the surgery further. He is aware that I can't afford so much. AlI I feel is a deep sense of guilt that is killing me every minute. I can't bear if my son loses his faith in me. I don't know what I can do but I'll save him at any cost." - Mubarak, Father of 15-year-old Sameer.

Sameer was born with multiple defects. He has a hole in his heart that separates the top two chambers of the heart. This defect allows oxygen-rich blood to leak into the oxygen-poor blood chambers in the heart.  His left side of the heart is not formed properly. He has decreased flow of blood from the right ventricle to the pulmonary arteries.  The complications are affecting him severely day by day that only an urgent open heart surgery can save his life.

"Within few hours of his birth, his face turned blue and we were terrified. Doctors said he has a heart disease and the holes in heart will disappear as he grows. We took proper care of him but his condition is not predictable at all. He would seem to be normal but within a few minutes he would turn blue and become breathless. He has been taking medicines since his birth to prevent blood from clotting but doctors say that is not enough anymore. Ever since my son heard that he has stopped talking much, he sits all alone in the room. It is scary to think about the thoughts running in his mind." - Mubarak.

Sameer's parents Mubarak and Rabiya have always been very protective of him than his brother Hussain (18) and Shamina (13) who enjoys a good health. Despite his health issues, Sameer has always managed to do well in his studies. He loves to read and paint a lot. Sadly, most of the days he is forced to sit back at home because of his health. He was never able to play for a long time. He gets tired easily.


"Doctors have warned us to keep him away from getting cold because that will make his condition worse. We don't allow him to go out even if there is a slight change in the climate. He cries a lot, he pleads with us to let him go to school but we are helpless. He feels very sad. When his skin turns blue, other children get frightened and refuse to play with him." - Mubarak.

Only an urgent open heart surgery can save Sameer's life

Sameer's mother hardly eats and sleep these days. She is not able to accept that her son's life is in danger and they are not able to help him. They were hopeful that he will be normal someday and medicines would cure him. It was only when they had a 'Heart Camp' in their village in Erode district they realized that he cannot survive for a long time without a heart surgery.


"Sameer has always been very mature for his age. He understands everything and he never troubles anyone. He has not asked us anything. He asks us not to cry and he consoles us. He has told his brother that he is scared that he might die. I was totally shattered hearing this. As a mother, I feel terrible. All I have is my love and prayers but we need money to save his life." - Rabia.

15-year-old Sameer suffers from a complex heart disease since his birth. He has been struggling for a long time and medicines are not enough to save him. With every passing day, his condition is deteriorating. He needs an urgent surgery to survive. Sameer fears death at this young age and his parents are helpless. They need Rs 4 lakh for the surgery which is beyond their means. Only your support can save him.

"I'm a daily wage worker and my job is not stable. I manage to get around Rs 5000 per month with which I feed my family of 5. His medicines cost only a few hundred but there are times I had to borrow money to buy it. How can I afford a surgery? Whom do we have to ask for so much money? I feel guilty to even eat when my son is fighting for his life." - Mubarak. 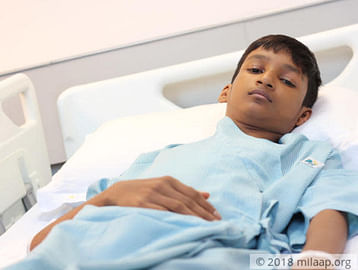 Sameer Is Battling Complex Heart Disease Since Birth, Medicines Aren't Enough To Save His Life

He needs and urgent surgery to survive. His parents cannot afford.

UPI: givetomubarak@yesbankltd (Copy to clipboard)
Or
Click here to read the instructions before you make a bank transfer.