6-Year-Old Cancer Patient Prays To God To Not Separate Him From His Mother | Milaap
loans added to your basket
Total : 0
Pay Now

"Every time I take him to the hospital, he would get scared and hold me tightly and ask me,   ‘Amma, what happened to me? Am I going to die?’ I would just say that he has a small fever, and that he shouldn't worry. How can I tell him that he is fighting cancer and we have nothing left to save him? Not a day goes by where I wouldn’t cry to God, asking him to save my son from this deadly disease." - Kavitha, mother

Varun is the youngest son and always been pampered and loved by his family. He would constantly imitate his favourite cartoon character with his brother and sister and would talk about becoming an army jawan when he grows up. He is really fond of his mother and any night if he falls asleep beside his father or brother by mistake, he would wake up and go back to his mother and hold her hand tightly and sleep.


“Varun would always sit beside me and tell every detail about his day at school. Every time before leaving school, he would kiss me goodbye. He was always happy and full of life. One day I got a call from his school saying that he was vomiting badly and crying uncontrollably because of severe stomach pain. Worried, I took him to the hospital." - Kavitha, mother

Varun underwent several tests at the hospital and the doctors found out that he has dangerously low haemoglobin count. They put under observation and recommended medications. But Varun's condition did not improve. Doctors then suggested a bone marrow test and when the results came out, Kavitha's worst fears came true- her little son has cancer.

When the doctor told me about my son’s fatal condition, I broke down into tears. I couldn’t muster the courage and tell my son that he’s fighting a deadly disease. I just told that he's just having fever. I hold him close to my heart and try to hold my tears and comfort him every time he cries because of stomach pain. Now he never leaves me and even if I leave him for a minute, he would start crying and screaming, 'Amma! Where are you?' - Kavitha, mother

Varun is suffering from Acute Lymphoblastic Leukemia, a severe form of cancer that starts in the bone marrow and spreads into the entire body. His abdomen has extremely swollen because of which he gets excruciating pain in the stomach and cries when his mother tries to touch that area. The weakness in his body is not allowing him to walk and he constantly sleeps as he gets tired very easily. He needs to undergo prolonged chemotherapy to recover from this fatal disease.

Varun’s father Karunakar is a wall painter who mortgaged the only piece of land he owned, for his son's treatment

Karunakar is a daily wage labourer who paints walls and buildings to make a living. He has no fixed income and earns Rs 500 per day. He has an elder daughter and son named Vennela (12) and Aranya Tej (8). With meagre income Karunakar earns, it’s been really difficult for him to look after them, when Varun is battling cancer. He took a loan of 4.2 lakhs by mortgaging the only piece of land that he has. He could look after the expenses of 4 rounds of chemotherapy but now he has exhausted all the money he borrowed and needs help.


“Despite hardships, I have worked hard to provide my children with a good life, and now I can’t even help Varun. Cancer has taken the joy out of my son’s life and I would go to any extent to save my son and give him the happiness that he has lost.”  - Karunakar, father

Varun is suffering from acute lymphoblastic leukaemia, a severe type of cancer which starts in the bone marrow and will spread into the entire body. He needs prolonged chemotherapy to survive. Varun is very close to his mother and is constantly scared that something might happen to him because of which he might be separated from his mother.

Your support can help these distraught parents save their son 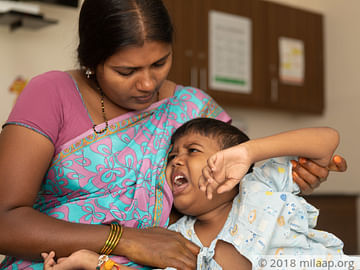 Varun needs to undergo prolonged chemotherapy to recover from cancer

UPI: givetokarunakar@yesbankltd (Copy to clipboard)
Or
Click here to read the instructions before you make a bank transfer.