Deadly Seizures From A Brain Infection Can End This 4-year-old’s Life Without Help | Milaap
loans added to your basket
Total : 0
Pay Now

“For the past 15 days, we have been waiting outside the ICU for some good news. But our baby girl hasn’t opened her eyes or even moved a limb yet. She looks lifeless, with all the tubes running through her limp body. I want to call out to her and tell her that we are always there by her side, and that she is safe, but I know she can’t hear me.”-Kiran Kumar, father of 4-year-old Upanya.

It was dead in the night when Upanya was tossing and turning in bed with a fever that was getting worse by the minute. Nothing her mother Swarnalata did was easing her condition, and she had to be taken to hospital in Khamam from their village in Thallada at 3 am the next morning.

“Her body was burning. We rushed her to the hospital, and she was admitted immediately. On the third night at the hospital, she started getting fits – it was so difficult for us to see such a horrendous sight – her whole body trembling and out of control. We felt we had lost her the first time it happened.”-Swarnalata.

“These seizures were taking my daughter’s life – one attack at a time – and the doctors at the hospital in Khamam advised us to take her to Hyderabad because she had no chance of surviving there. With our 2-year-old younger child in tow, we set out on a journey to Hyderabad that night itself.”-Kiran Kumar.

These desolate parents did not have any clothes, supplies or enough money with them; but all that mattered for them was their daughter’s life

“We came empty-handed to Hyderabad. We didn’t have enough time to go back and get clothes or anything that would come in handy at the hospital. It was here that we bought one set of clothes for us and the small baby. We also got one bedsheet using the little money we had. Then I called up friends and family to ask for money. I was able to pay some bills at the hospital using that and selling my wife’s jewellery.”-Kiran Kumar.

This 4-year-old is on heavy antibiotics that is controlling her brain infection from spreading. She has breathing difficulties too and cannot breathe on her own as of now. The little girl who used to pester her father to play songs on YouTube and loved Dora The Explorer is now unconscious and has not responded to her parents’ touch or call yet.

“Everybody is telling me to be brave and I am trying my best too- but how can you be brave when your darling daughter is lying like a log of wood in front of your eyes? I cannot explain my distress. My only solace is that I get to see her for five minutes every morning and evening. I just hope she gets better, that’s my only prayer.”-Swarnalata.

Both farmers, Kiran Kumar and Swarnalata have already given away their life’s savings for Upanya. She needs at least 3 more weeks of ICU care to get her life-threatening infection cleared, but these parents do not have a penny more to spare. These parents were forced to bring their breastfeeding two-month-old along with them because there is nobody else to take care of her. They are sleeping in the corridors of the hospital because they are desperate to save Upanya. Only finances are stopping them from doing so.

Your small contribution can help save 4-year-old Upanya 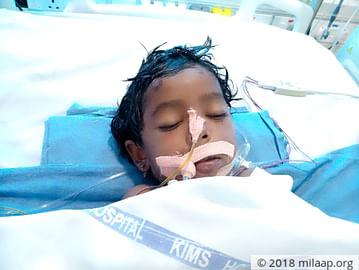 Without prolonged ICU care, this child cannot live to see another day.

UPI: givetokiran@yesbankltd (Copy to clipboard)
Or
Click here to read the instructions before you make a bank transfer.