His Blood Is Not Getting Enough Oxygen, Damaging His Brain And Costing His Life | Milaap
loans added to your basket
Total : 0
Pay Now

His Blood Is Not Getting Enough Oxygen, Damaging His Brain And Costing His Life

"He called me Amma for the first time only when he turned 8-years-old, he was not able to utter a word. He couldn't walk normally like other children. He never had a normal life, he lived in isolation. His inability to express his pain and confusion made his life miserable.  I was longing to hear his voice, but all I can hear is his cries and he pleads to take him away from the hospital. His body turns blue in color every now and then, within few minutes he would struggle to breathe. My son is going through this pain and trauma birth since his birth." - Lakshmi.

Thirumalai turned blue within few hours of his birth

Thirumalai's body turned blue within few hours of his birth because he was not getting enough oxygen. His parents thought he was dying. When the doctors told them that he has heart disease, they were shocked but the worse was yet to come.

Initially, he was on medical management but Thirumalai began having development challenges. He did not start to talk or walk at the right time. His parents thought he would pick up slowly but it never happened. It was only last year, when he turned 8 that he started talking and walking.

Thirumalai's breathing trouble has intensified and has become too weak

He seemed to be fine for few months but his breathing trouble intensified. His school is just 1 km away from his house but he can hardly walk few steps. His father drops him at school every day. Most of the days, teachers would send him back home saying that he looks very tired and weak.

"My children are the first generation learners in my family. My wife and I had only one wish in life, to provide education to them. Now, I gave up all my dreams, I want my son to survive. I don't send him to school to score high marks but to make him feel that he is not left out. It is so painful to see him sitting in a corner, isolated even in school. Sometimes the other boys make fun of him. I don't have the strength to explain his condition." - Kundamudaiyar.

With a progressing condition like this, he needs an urgent surgery

Thirumalai has an elder brother, Manoj (13) who has stopped playing outside. He sits with Thirumalai all the time. Although he doesn't understand the intensity of the disease, he takes care of his brother and does not let him cry. He shares everything with him.

A few days ago, Thirumalai's condition became worse. He is not able to focus on anything, he forgets his lessons taught in school quickly. His heart beats very rapidly and the murmur is heard constantly. He has lost weight drastically and has no appetite.  Doctors said that he needs a heart surgery at the earliest to survive. Further delay would turn fatal.

With time running out, this boy's family is desperate for help

Thirumalai requires heart surgery to allow enough blood to pass through his lungs and pick up more oxygen. Thirumalai has high possibilities of living a normal life if the surgery is done immediately. Even the slightest delay could cost him his life.

Thirumalai's father works as a driver and earns Rs 5000 per month. He is from Ramanathapuram district. He has to borrow money even for the travel to the hospital. Lakshmi was working as a daily wage worker, but she was forced to quit her job after his condition became worse.  She says next to him and gives all her love and support. Unfortunately, that is not enough. They need money to save their son's life. Thirumalai is longing to live a normal life. Treatment requires Rs 4 lakhs, your support will save his life.

Your contribution can give Thirumalai a chance to live his life! 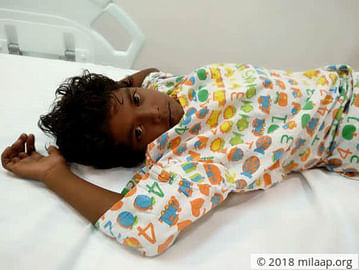 This Surgery Decides Whether Thirumalai Lives Or Dies

He is now losing his brain function, and without this surgery, he will succumb to the disease.