Urgent: 1-Year-Old Sriman With A Damaged Liver Waits For Help So His Pain Will Stop | Milaap
loans added to your basket
Total : 0
Pay Now

Urgent: 1-Year-Old Sriman With A Damaged Liver Waits For Help So His Pain Will Stop

Shares
Shares
Share on whatsapp
Sriman was only 3 months when he underwent a surgical procedure for his liver damage which he was born with. All these months, his parents didn’t know how much pain he was in. Now as he is starting to talk, the first words that come out are his cries in pain. His poor parents know that to keep him alive they have to make sure he gets a new liver and it has to happen immediately.


Baby Sriman with his father Rajanna.

Since his birth, there has not been a day without pain and suffering

While he seemed like a normal newborn at first, but very soon he became weak and dull. His parents Rajanna and Manjula noticed that he was passing white stool. He had a blocked bile duct – that was damaging his liver.

Earlier this year, he became very sick and that was when his parents found out that his liver is totally decompensated. Only a liver transplant can save Sriman now. And he needs it immediately.


Sriman's stomach is swollen due to liver failure

“His health problems started soon after his birth. He would feed and then immediately have white colored stool. When we took him to the doctor he told us that his liver was already damaged and he needed a surgery immediately. So we arranged for that without any delay.,” says Rajanna

When Sriman managed to take more food and started to put on some weight, Rajanna and Manjula were relieved. They prayed for their son is never ill again. But at the beginning of January 2018, he passed white stools again. Alarmed, his parents took him to the hospital immediately.

Rajanna and Manjula were shocked to know that their son's liver is completely damaged and this means their son's life in danger. Soon, his stomach started swelling up. Sriman is always in tears. He cannot eat or sleep due to pain.

Rajanna works as a helper in a small grocery store in his village in Mancherial, Telangana. His wife stays at home to care for Sriman and their 2-month-old daughter. Rajanna's salary is barely enough to make ends meet and he is already in debt from funding the Sriman's previous surgery.

They want to do everything that they can to save Sriman, but no one will lend them any more money. Every day, Sriman's condition becomes a little worse. His parents can't let him die. A liver transplant will cost Rs 16 lakhs and it is an amount that Rajanna can never put together in time to save Sriman.


“We thought he was better. He used to run around and play and started calling out to us. But now he is slowly getting more sick. He is weaker and has fever every other day. We were waiting for his first sentences – but he doesn't speak much these days.”

Rajanna says he would be happy to give his son his own liver, but he is a diabetic patient and Manjula is a nursing mother. They are in search of a donor. These parents wished one of them could donate to save their child. They are in shock and desperate for some help that will allow them to save Sriman.

It kills Sriman's parents to watch him suffer in pain. Without even able to express the agony, little Sriman has spent all these months in pain. If we can support this family through this fundraiser, Sriman will be recovering and going home. Rajanna and Manjula will get their child back.

Funds raised through this fundraiser will support the family for the liver transplant. 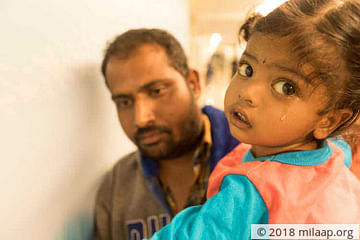 A liver transplant is Sriman's last chance to be free from pain. Our support will save him.

UPI: givetomanjular@yesbankltd (Copy to clipboard)
Or
Click here to read the instructions before you make a bank transfer.