Farmer In Debt Can't Save His 3-Year-Old From Heart Disease That Has Stunted His Growth And Is Threatening His Life | Milaap
loans added to your basket
Total : 0
Pay Now

“When I see him laughing and playing with the kids, for a fleeting second I feel that he is also normal. But reality strikes me when I see him stop all of a sudden and pant heavily. His heart is failing him day after day…as a poor farmer, I can only wish that I had enough money to fix it”-Sandeep, father of 3-year-old Samar.

At birth, 3-year-old Samar looked absolutely normal; it was only after he turned 2 months old that he started getting breathing troubles all of a sudden. He was found to have two holes between the two upper chambers of his heart. This was causing oxygen-rich blood to leak into the oxygen-poor chambers of the heart.

“He could not feed properly. At first, I thought that it was because I had a heavy let-down of milk. But soon I noticed that he started getting breathless. It did not look normal for a baby; I had never experienced it with my first-born. It was after we took him to the doctor that we found out about his heart condition. The doctors told us that he needed a surgery within one or two months”-Rinku

“I couldn’t sleep for days after the doctor said that my son needed a surgery immediately or he would not survive. I just had one worry in mind: How would I afford the Rs 90,000 that was required for it? I did not have any savings. I swallowed my pride and asked my friends and relatives to help me and got the surgery done”-Sandeep

3-year-old Samar’s surgery was deemed successful, but not for long

“Two years later, we found out painfully that the other hole had not closed when we went for a routine check-up. We could not believe what we had heard – it was too much for us to take. Our sweet, innocent son still had a bad heart – and he was suffering developmentally from it”-Rinku

Where a healthy 3-year-old should weight around 12 kg, Samar weighs less than 10 kg. He looks frail and weak, and much smaller than he should. This is really worrying his parents because nothing they do is helping him gain weight.

“We have even gone to the extent of foregoing our own needs for the sake of our son – we get him fresh fruits and vegetables that we cannot really afford, but there is no use. He is getting smaller and smaller every day. The doctors have clearly told us that only an urgent surgery can help him get better”-Sandeep

Sandeep is a farmer who harvests wheat and mustard on his small farm, and earns only around Rs 7,000 when the crop is good. He is the sole breadwinner of his family consisting of his elderly parents, wife, Rinku and two children – Khushi (10) and Samar (3). He does not have enough money to pay for his son’s second surgery.

“I have still not paid off the loans that I took for my son’s first surgery. Now he needs another surgery immediately, but I have no way to make it happen. I have tried asking a lot of people for help, but nothing has worked out so far. I don’t want anything bad to happen to my child just because I am poor”-Sandeep

Samar needs a surgery to fix the hole in his heart immediately or anything could happen. He has lower-than-normal levels of oxygen in the blood that is supplied to the brain, organs and tissues. This is why he is not growing up normally. Without a surgery, his heart can fail. His father, Sandeep, needs our help at the earliest to make the surgery happen fast or he could lose his son.

Your contribution will help this farmer save his son's life. 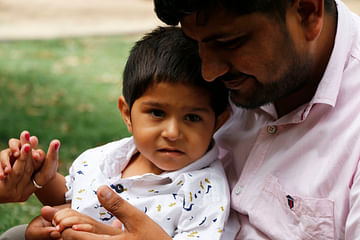 Samar's Heart Can Fail Any Moment Without Surgery

This 3-year-old may not live to see another day, let alone have a normal life. You can save him.