5-Year-Old With Hole In Her Heart Struggles To Stay Alive | Milaap
loans added to your basket
Total : 0
Pay Now

“Sadhana has always looked very thin and weak. We believed it was because she was not eating enough nutritious food. With our limited means, we had tried everything – from cooking tasty food to local herbal preparations – to help her. But she could eat nothing. Only recently we realised that her poor health was due to a heart defect. Without an urgent surgery, she will not grow normally – and worse, she could even succumb to heart failure. But we are very poor people who cannot afford it.”-Sudha, mother of 5-year-old Sadhana.

Recently, Sadhana developed a fever that made her sleep continuously for 24 hours, making her parents worried

Little Sadhana had always been smaller compared to the children in her class, but she never suffered any major ailment for her parents, Sudha and Kumaran, to suspect that she had health issues. Even when she was born, she drank milk like a normal child, although she was a little underweight. But last April, she got a high fever that stayed for more than 10 days. What was making her parents more worried was that their child was sleeping for unusually long hours.

“She began sleeping all day and night. We couldn’t even wake her up…she would not respond to calls and would struggle to open her eyes due to exhaustion. We were very scared because to our knowledge, she was like any other kid.”-Sudha.

She was taken to many hospitals, before she was diagnosed with severe heart disease

Kumaran and Sudha took their daughter to many local clinics in Puthur, Tamil Nadu. Some even suspected that she could have an infectious fever of some kind, like typhoid. But doctors were confused about her condition until one of them noticed bluishness on her arms.

“One doctor finally told us that her arms look really blue and this may have to do with something related to the heart. He told us to go to Chennai for better treatement. We borrowed some money and left immediately. It was in Chennai that we were told that our daughter had a severe heart disease and surgery was the only way to cure it.”-Kumaran.

Sadhana’s heart defect is causing less oxygen flow in her body, which in turn does not let her eat well to grow

Sadhana was diagnosed with Pulmonary Atresia With Large Subaortic Malaligned Ventricular Septal Defect, a condition where the valve which allows blood flow from the heart to the lungs is completely blocked. In addition, there is a large hole between the two main pumping chambers, which allows mixing of oxygenated and de-oxygenated blood in the heart. Both these problems are causing poor oxygen flow in Sadhana’s body. This is why she cannot eat well or gain enough weight.

“Now I know why she would eat only paal-sadham (milk and rice). When she would tell us, ‘I don’t like this food’, we thought it was normal for kids to be fussy. I wish we had known this earlier – we have already incurred a lot of debt due to financial issues now. I am a poor daily wager who earns a meagre 200 rupees a day, and does not have anyone to turn to for help. There is no way someone is going to loan me such a big amount required for her surgery. I don’t know what to do.”- Kumaran.

Sadhana’s heart condition does not let her live or grow normally. Her poor, uneducated parents didn’t even know that their child had a disease until very recently when she developed a fever that did not go away for days. Sadhana will develop more complications in the near future if she does not get the surgery – her heart may even fail. But her father is a daily wager who is already buried in debt and has no way to arrange money for his daughter’s urgent surgery.

Your kind contribution can help this child get urgent heart surgery 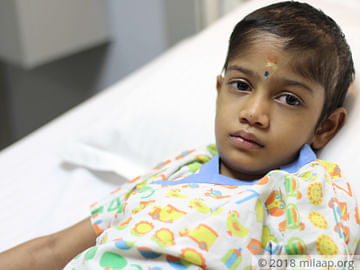 This child is extremely underweight and is not growing well due to her bad heart.