Shares
Shares
Share on whatsapp
Priyanka is not like other children her age. She cannot walk for long. In fact, she cannot even carry her school bag by herself. Her father drops her and picks her up too. Over the past 2 years, her spine has become completely deformed. Once an agile girl who practised yoga every week, Priyanka can now hardly stand. The girls in her class who were once her friends, make fun of her.

“It all began two years ago when she started having a hunch. She was just like every other child before that. Initially, she complained of leg pain, but over time it got worse. When we took her to the hospital, the doctors said she needed a surgery.” – Kasthuri, mother

Priyanka has been diagnosed with Adolescent idiopathic scoliosis. It’s the abnormal curvature of the spine that appears in late childhood or adolescence. Instead of growing straight, the spine develops an elongated "S" or "C" shape. The only cure for this is a surgery. But Priyanka’s parents can’t afford it. Any further delay in treatment, and this condition can affect her heart and lungs.

Priyanka is in 7th grade, and she's one of the brightest students in class. She used to go to school with her friends but after her condition became worse, her father drops and picks her at school every day. She lost many of her friends because she cannot play with them anymore. There were days she was sent back home because of severe back pain.. There are only a few weeks left for her final exams and she’s determined to do well. Unfortunately, she has started having breathing trouble and palpitations because of her deformity. If it gets worse, she will be completely bedridden.


"One day, she came from school and told me, "Amma, my friends said that I'll soon become like the 'paati' (grandma) who sells sweets outside our school, she also has a big hunch on her back and she can't even look straight." I told her she'll get better soon and do everything that she likes. Now, when anyone makes fun of her, she tells them she’ll be fine soon. But there are days when she’s very upset. It’s hard for such a young child." - Kasthuri.

Priyanka is hopeful that the surgery will make her better, but her parents can’t afford it

Priyanka's father is a housekeeper in a hotel and earns Rs 6000 per month. With this meager income, he manages to take care of his wife and three daughters. He does not take even a single day off, he saves every rupee for his daughters. He had to borrow money even for the scans and medicines. The doctors have warned him that any further delay in treatment, and she can become totally bedridden. Priyanka's unbearable shoulder pain or her inability to walk much have not crushed her spirit, she is hopeful that she will be back to normal soon. But her parents cannot afford the surgery, they need your help.

Your contribution can save her from this crippling condition. 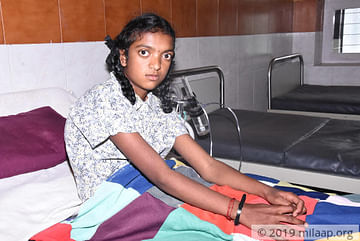 Priyanka's Spinal Deformity Is Causing Her Unbearable Pain, She Needs Your Help

Her poor parents cannot afford the surgery.Your contribution can save her life.

UPI: givetoshanmugamfunds@yesbankltd (Copy to clipboard)
Or
Click here to read the instructions before you make a bank transfer.