Parents Who Begged For Money To Treat Cancer-Ridden Son, Now Have Nothing Left To Fix Daughter's Dying Heart

“It has been only a few days since we came back from the hospital. Our elder son, 8-year-old Ruben had cancer for which he underwent 6 months of chemotherapy. He had a swelling in his neck and had become so weak; we thought we would lose him in the initial stages. It was so frightening for poor parents like us who only know how to worry about what would happen in the future. Somehow we got him treated. Now as a cruel twist of fate, we learned that our daughter is dying. We have no money or spirit to fight anymore,”- Jayaprakash, father of 7-year-old Rajeshwari whose fatal heart disease is getting worse by the minute.

Little Rajeshwari’s heart has multiple problems, which will kill her without urgent surgery

7-year-old Rajeshwari has a hole in her heart and her blood vessels are attached to the wrong chamber pumping bad blood to her organs. This is potentially very dangerous and there is no saying how long this child will survive.

“The doctors tell us that anything could happen at any time. She could live with a defective heart for a few more years or she could die the next second. We cannot take chances with our daughter’s life. When she smiles at us, sometimes we wonder if this will be the last time she does so. We try to be with her all day because her heart is not only killing her, but our hopes also”-Jayaprakash

Apart from some mild breathing difficulties she had when she was 2-years-old, Rajeshwari was a completely normal baby. Her parents, Chitra and Jayaprakash did not know that their dear baby’s heart was weak because the doctors at a village medical center had told them that the breathing difficulties would go away with age. It just got worse.

“We have not even studied till high school. So we assumed that the baby is alright because she is not showing any severe symptoms. Only now when the doctors are telling us that she is very critical that we realise that she had been sick all along. I don’t know what we are going to do. She needs a surgery at the earliest, but from where will we make the money required for it?” – Chitra tears up.

Jayaprakash is a driver who earns a meagre salary, while Chitra quit her job when her son, Ruben, was diagnosed with cancer. The family was just recovering from the financial burdens they had accumulated during his hospital stay. Now, life has cruelly thrown another challenge at them.
The family had given everything away for 8-year-old Ruben's cancer treatment

“We live in a very remote village near Salathur district in Tamil Nadu. I used to make a decent sum (Rs 10,000). My wife also used to work in a matchbox making factory, where she used to earn around Rs 700 weekly. But she quit soon after Ruben was admitted for chemotherapy. Our expenses went out of control. I saw myself begging for money to treat my son. Just when I thought everything was going fine, Rajeshwari’s life is in danger. How will I get her surgery done when I am already drowning in debt?”-Jayaprakash

Rajeshwari needs an open heart surgery immediately because her heart is getting weaker and weaker. She is tired all day because her breathing is heavily compromised because of her weak heart. Jayaprakash cannot make Rs 2 lakhs needed for the surgery on time.

“I wish I had a plan to sort this mess, but I don’t. Nowadays, I am scrambling for money to put some food on the table, let alone save up for her surgery. My child doesn’t know what is coming for her; she is happy and cheerful all the time. We haven’t told her that the reason she cannot play like other children is because she is slowly dying. I need help to save my daughter. Please help me!”-Jayaprakash

Your kind contribution can help these poor parents save their child 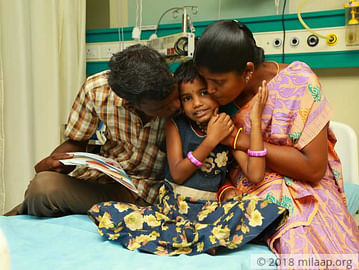 Her Heart Will Stop Beating Without This Surgery

Rajeshwari's breathing difficulties are making her weak. Her parents cannot afford her surgery.