This 7-year-old Says Her Dolls Die Of Kidney Failure Because She's Afraid Of Her Kidney Disease | Milaap
loans added to your basket
Total : 0
Pay Now

Shares
Shares
Share on whatsapp
Madhuri is a 7-year-old who has been sick for years. Unfortunately, her condition was simply not detected in time and now both Madhuri’s kidneys have failed. She needs an urgent kidney transplant and her parents are both willing to donate their own kidney. All they need is a little support making it happen.


Madhuri with her father Narayana at the hospital

Madhuri has been sick since she was three

Madhuri’s father Narayana can now see that his daughter was sick from when she was just 3-years-old. She had episodes of fever and stomach pain that left her unable to get up. She would take the doctor’s medicines and get better. It was only last year, that her condition became really bad.


Madhuri before she fell sick

“She came back from school running a fever and vomiting. She was very tired and her condition seemed worse than normal. I took her to the nearest big hospital in Visakhapatnam and there the doctor asked me to take her to CMC, Vellore, for tests. Suddenly, the doctor there told me that her kidneys had failed,” explains Narayana.

Madhuri with her parents at a temple

Narayana took an ‘educated’ nephew with him to Vellore, but still feels that their understanding of Madhuri’s condition is not accurate. All he was able to understand was that his daughter’s major organs were damaged and till she got a kidney transplant, she was in grave danger.

Madhuri is her parents’ second child and the only one that lives with them. Her older sister Gayatri lives with her maternal grandparents’ house in the next village. Her parents are shattered to learn that their happy, irrepressible daughter is so close to losing her life.

Despite the costs, Narayana has met many doctors the last two years to save Madhuri

Narayana has never gone to school and the closest he came to studying was when a friend sat with him and tried to teach him reading. He is a farmer in Pathikayavalasa – a 4km square village in Andhra Pradesh. But, Narayana says, that has not stopped him from doing everything he could to save his daughter. Both Narayana and his wife Adilakshmi never expected that all their efforts would be in vain.


“I took her to to hospitals in Srikakulam, Vishakhapatnam, Bangalore, Hyderabad, Mumbai and Chennai. I only speak Telugu and I didn’t understand much – but they all told me to go home and that my daughter was fine. I got to know what was wrong in September,” Narayana says.

Madhuri is at home now till her parents can arrange for her kidney transplant. Adilakshmi often bursts into tears when she sees Madhuri. Madhuri herself doesn’t say anything to her parents but while playing – her dolls often die of ‘kidney failure’. Her father feels that perhaps this is because of the pain of dialysis and is praying for the day that Madhuri stops suffering.

How you can help this brave girl

Madhuri’s parents are just shattered when they think of being unable to save her. They are ready to give her one of their own kidneys, but the transplant will cost them Rs 13 lakhs – an unimaginable amount for Narayana. As a daily-wage farmer in a small village, he doesn’t even know any one who will lend him the money. He is desperate to save his precious child.

Contribute to help this family in a terrible time. 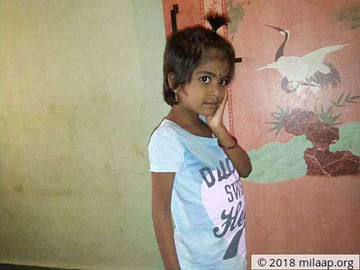 Save 7-year-old Madhuri From Kidney Disease

Madhuri's life is in danger because of kidney failure. She needs a kidney transplant to live.