3-Year-Old With Cancer Is Fighting A Deadly Infection And Needs Urgent Help To Survive | Milaap
loans added to your basket
Total : 0
Pay Now

“Nandika has barely opened her eyes since last week. She has been struggling to breathe due to a dangerous infection that has affected her vital organs. Blood cancer had already made her so weak, but this infection has added to her troubles. My baby is only 3; my heart sinks when I think about how she is holding on to life despite all this. We have given away everything we had for her and cannot afford to lose her at this point. But the truth is we have run out of funds to continue her treatment and have nobody to ask for help in a strange city.”-Khokhan, father of 3-year-old Nandika

The first time she developed high fever two months back, her parents Khokhan and Mithurani did not think much about it. Their daughter had been healthy since birth, and used to get fevers sometimes that lasted for a day or two. But this time, her fever did not subside as usual. They took her to the nearest hospital in their small village in West Bengal, where Nandika was given medicines as usual. These parents believed that their child would get well soon, but knew something was wrong when the fever returned with greater intensity in less than one month.


Nandika, in happier and healthier times

“We were really alarmed because fevers never affected Nandika’s energy usually; but this time she was always lying down and did not want to speak much either. Our daughter was starting to become a different person altogether. When we took her to the local clinic again, they checked her blood and said that she needed to be taken to a better hospital. But they didn’t imply anything. I sensed that something bad was about to happen.”-Mithurani, mother.

Khokhan had often heard from friends that Chennai had good hospitals and did not think twice about taking his daughter there. Her fevers were only getting worse, and this desperate father put his 10-year-old son in the care of his grandparents and left for Chennai immediately with his wife and sick daughter. Since he had very little savings, he had to borrow some money for the trip.

“I wanted to get my daughter a thorough check-up. She had become so dull – I knew that it was because it was not normal fever. But I hadn’t imagined that she would have anything deadly in nature. I was hoping for her to be okay in a few days. ”-Khokhan.

This poor baby was diagnosed with cancer, leaving her parents heartbroken

The final result of a couple of tests at a good hospital in Chennai gave these parents the shock of their lives: their daughter was found to have severe blood cancer and needed to be started on chemotherapy immediately. All Khokhan had left at this point were a few wads of Rs 100 notes. He called his friends back in his hometown and managed to arrange some money. He knew in the back of his mind that he would need more than what he received as help, and that he could never afford it, but his daughter’s life was his first priority.

“My wife and I couldn’t speak to each other for a few days. Money issues were there, but looking at our innocent child’s face and not being able to process that she had cancer, was the worst. My wife had stopped eating completely before she had to be hospitalized too. The doctors have told us to be strong. I don’t know how parents can be strong seeing their child suffer like this.”-Khokhan, with tears in his eyes.

Cancer had taken a toll on this 3-year-old’s immune system to the extent that she suddenly went into septic shock last week. Her soft organs, mainly heart, are at the risk of failure now. She had to put on ventilator support because of severe breathing difficulty and low blood pressure. Her blood platelet levels also took a dip.

“She is just lying there in the ICU – lifeless – a poor shadow of what she was earlier. Her giggles ring in my ears and haunt me. I keep watching her videos on my phone - the funny faces she used to make and her dancing – my daughter was the light of my life. I have to save her, but I cannot arrange enough money on time.”-Khokhan.

Little Nandika is in a very critical stage now – she has a dangerous infection that has landed her in the ICU on ventilator support, and is also fighting acute blood cancer. She needs prolonged ICU support as well as chemotherapy for her cancer. Her father, Khokhan, works as a small supervisor in a transport agency and has irregular income depending on work availability.  He has not gone back to work for more than a month now, and has exhausted the last paisa he had in his pocket. He cannot pay for Nandika’s treatment and needs urgent help.

Your kind contribution can help save this little girl’s life 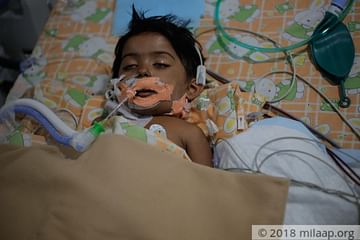 UPI: givetokhokansahoo@yesbankltd (Copy to clipboard)
Or
Click here to read the instructions before you make a bank transfer.