Shares
Shares
Share on whatsapp
Every day, Monika waits eagerly for her younger brother, Jaideep, to come home from school in the evening. As soon as he does, she doesn’t get ready to play with him like other kids in the neighborhood. Instead, she takes his school books and goes through his notes, asking him what he learnt that day. Her face lights up when he narrates funny incidents involving his classmates and teachers. For a moment she feels that she too is there, among them. But soon, reality strikes her – she knows that she might never set foot in a school because of her failing heart.


“Monika knows about her heart condition. She understands there is a reason why she cannot stand or walk for long, or go to school like ‘normal’ children. But that doesn’t stop her from dreaming big. She aims to be a doctor one day so that she can help people, especially children overcome serious illnesses- after all, she knows exactly what they go through.”-Prakash, father of 13-year-old Monika.

Right after she was diagnosed, Monika underwent an emergency surgery in a private hospital in her hometown, Delhi. Her worried parents, Prakash and Kavita, believed that this would put an end to their baby’s breathing problem once and for all. However, what happened was the opposite. Her health started deteriorating over the years, as a result of which she was not allowed to do even daily activities that other children of her age did – like running or jumping – as it would make her run out of breath completely. But her parents still put her in a school when she was 5-years-old, but soon had to pull her out as she would always end up missing classes due to frequent fainting. Monika even had to undergo a second surgery two years ago, but that did not help improve her condition. Now, her heart is almost giving up on her and without another surgery in a few days, she will not survive.

“Her suffering is more pronounced during the winters. Delhi winters are infamous because of the pollution too – in Monika’s case the effects are devastating. Her heart beats more rapidly – I can feel the loud thumping when I place my hand over her chest. She ends up almost suffocating and collapsing from exhaustion on really bad days. Being poor, we cannot even take her to another city where the winters are less harsh.”-Prakash, father.

Prakash makes a living by selling children’s undergarments on streets in Delhi.  On good days, he earns around Rs 200, which is hardly enough to feed and clothe his wife and two children. Due to Monika’s persistent illness, he has always had to spend the bulk of his salary on her medical expenses. He was somehow able to afford her previous surgeries by borrowing money from his relatives, but this time he is completely out of help.

Your kind contribution can help Monika live a normal life 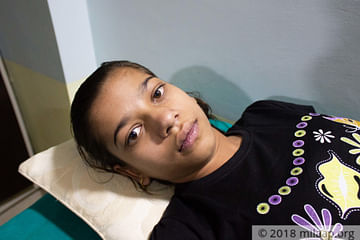 UPI: givetoprakashchandra@yesbankltd (Copy to clipboard)
Or
Click here to read the instructions before you make a bank transfer.