Unable To Bear The Pain Caused By Cancer, This 8-Year-Old Says He Wishes To Die | Milaap
loans added to your basket
Total : 0
Pay Now

Unable To Bear The Pain Caused By Cancer, This 8-Year-Old Says He Wishes To Die

"He used to watch his favourite cartoon show as soon as he comes home. He used to make me laugh by imitating his favourite cartoon character. Now he lies in the bed growing weaker with each passing day. Everytime he gets unbearable pain in the stomach, he would just hold his stomach and say that he would rather die than go through such terrible pain. I break down into tears everytime he says that.” - Aayusha, mother

Moin was all happy and excited about going to school after the summer vacation. He always liked making new friends and playing with them. He started having a high fever with severe body pain. He was taken to the hospital and was given treatment for 25 days. When the fever didn’t subside, his parents took him to some other hospital in Bangalore, Karnataka.


Moin before he was diagnosed with cancer

“ He was so happy when my husband bought him a new cricket bat and was excited to play cricket with his friends the next day. And that was the last time I’ve seen him happy. The next day he was running at high temperature and was whimpering because of severe body pains. No one in our family has any illness. I don’t understand how could my son get such a deadly disease. When the doctors told me about Moin’s disease, I cried uncontrollably. He gives me joy that no one else can and I can’t imagine a life without him” - Aayusha

Moin is suffering from non-Hodgkin's Lymphoma, cancer that develops in the lymphatic system and spreads into other body parts vigorously. He needs to undergo chemotherapy to recover from this fatal disease. He gets swelling in the abdomen because of excess accumulation of fluids and the fluid needs to be removed every now and then. He gets fevers frequently and has drastically lost a lot of weight in one week. He is unable to eat food and is growing weaker every day.


“Every time they remove excess fluid from this stomach, Moin asks me what are they doing and I would say that they’re doing it for the fever he has. I couldn’t tell my son about the bitter truth. He’s so young to struggle through such agonizing pain. He’s kept in the ICU and I only get to be with him when he has to eat or take medicines. I feel guilty for I couldn’t even be with my son and comfort him from the pain he’s going through.” - Aayusha

Moin’s father Mohammad Rafi is a car mechanic and earns about 7000 Rs per month. He has two elder daughters named Fiza Sabrin (13) and Fusaina (10) who doesn’t know about his brother’s severe condition. Rafi borrowed 1.8 lakh Rs from his brother to look after his son’s expenses. But now he has exhausted all the money that he had and is in dire need of help to save his son.


“ I have always provided Moin whatever he asked for and now I couldn’t even provide him with a healthy life. I have even stopped going to work as I don’t want to leave son when he’s battling for life in the ICU. Moin is the reason for my happiness and I would go to any extent and even beg someone to save my son from this fatal disease.” - Mohammad Rafi, father

Moin is diagnosed with non-Hodgkin's lymphoma, an aggressive form of cancer that will spread into the entire body without immediate treatment. He needs to undergo chemotherapy for a period of one month to recover from this deadly disease. With his meagre earning, it’s been very difficult for Moin’s father to look after the expenses. With the money he borrowed from his brother, he could look after the expenses, but now he’s about to exhaust all the money he has. Only your support can help Rafi save his son.

Your kind contribution can save Moin 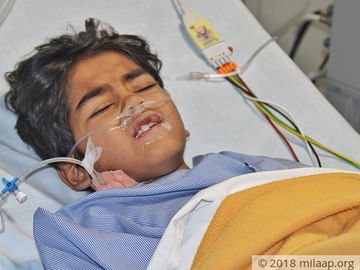 Cancer will kill this 8-year-old without urgent treatment