Persistent Pneumonia For 3 Months Has Left This 11-Month-Old Face To Face With Death | Milaap
loans added to your basket
Total : 0
Pay Now

“It has been months that my baby hasn't slept properly. Sometimes he gets such high fevers that his body shakes in an uncontrollable manner. He was such a lively baby and now he mostly lies motionless or cries. On some days he is so critical that even passing the night seems difficult. I shudder at the thought that the next morning he might not wake up.” Romana, Umar’s mother.

Since he was only a few months old, Baby Umar's life has been all about suffering

Like every other new parent, Romana and Umar were very excited when they held baby Umar in their arms for the first time. But like most parents, they have not been able to have a normal happy life with their baby. Baby Umar started suffering when he was merely 7 months.

“I see my friends getting paranoid when their babies get a mere fever. But I have been seeing my baby suffering from pneumonia continuously. When my baby shivers from fever or struggles to breathe, my heart stops for a second. He cries uncontrollably and sometimes he lies motionless due to too much crying. I have cried so much that my tears have dried up.”

The delay in proper diagnosis has only worsened Umar’s condition

Baby Umar has been suffering from pneumonia and often becomes breathless. He has been in the hospital for 2 months now. They took him to several hospitals to get him tested. It took Romana and Numan a while to understand the reason for their baby’s recurring fevers. Many doctors tried curing his pneumonia with medicines and injections, but it only became worse. Now he needs to stay in the PICU with oxygen support to survive.

“I never thought that pneumonia will become so bad that it would result in a tug of war with my baby’s life. I have always been extra cautious about my baby. He opens his eyes once in a while and the next moment again he has no strength to stay awake.”

Without a job in hand and all savings spent, it is impossible for Numan to save his baby

Numan used to work in a construction site in Mumbai. His meager income of Rs 7000 was never enough for his own sustenance. After sending most of his salary home to his wife and family in West Bengal, he usually never had anything left. Since May, when the building project he worked for concluded, he has been stuck in the city with no income. But he cannot go home to his dying son without finding a way to save him.  He has already spent Rs 4 lakhs so far by borrowing from friends and relatives. But now he can’t afford the Rs 4 lakhs needed to save Umar.

“Numan used to come home once in 3 months. But now he can’t even leave the city due to lack of money. He often calls and breaks down. He feels incapable to take care of his family. I am trying very hard to keep his spirits up. I can’t see my husband lose a battle like this.”

11-month-old Umar is suffering from persistent pneumonia and needs to stay in the PICU. His father no longer has a job and has given away everything he had. He is neck-deep in debt and can’t even find a way to save his baby.

Your support will help this baby survive. 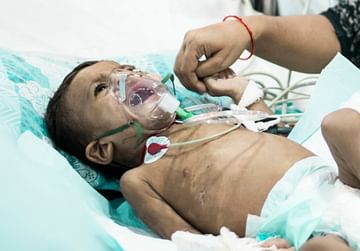 His mother struggles to save his life. Every day she lives in fear that he will not make it.

UPI: rzpy.givetomlpmdumar00001@hdfcbank (Copy to clipboard)
Or
Click here to read the instructions before you make a bank transfer.