An Urgent Surgery Is The Only Way This 8-Year-Old Can Hear And Speak Properly | Milaap
loans added to your basket
Total : 0
Pay Now

"My 8-year-old son, Ashraful struggles to speak even the basic words like ‘ammi’ and ‘abbu’ as he is deaf. All he knows is sign language. The neighborhood kids make so much fun of him that he doesn’t even step out of the house. Now we have a chance to get him a surgery that can make him hear and speak normally, but it is out of our reach,” Sarfaraz, Ashraful’s father.

Even speech therapy could not help little Ashraful

8-year-old Ashraful’s life so far has been a struggle. Ashraful and Saheefa sensed some problem with their child when he was not trying to speak even after turning 2. After observing more, they found that he doesn’t respond to any sound. They knew things weren't fine.

“We had no idea that teaching him sign language for 3 years will only make his speech defect worse. He got used to sign language. When he started undergoing speech therapy, he refused to speak. He would constantly try to communicate in sign languages. We want him speak like other normal kids, but I feel we are cursed. My poor son is struggling every day.”

With only 10% audibility, Ashraful will become deaf and dumb for life without surgery

Little Ashraful was born deaf due to which he has never learnt to speak. He has only 10% audibility in his left ear. His father put a hearing aid that has helped him hear only partially. He can only hear loud sounds now. He can hear his parents only if they speak very close to his ears. A cochlear implant is the only way now for him to hear. If the implant is delayed, he can be deaf and dumb for life.

“He has a teacher who helps him learn at his pace. He is a very intelligent child. He understands what is going around him. Sometimes he tries to console us in sign language. It breaks my heart to see him suffering so much. If he gets his hearing and speaking ability, I know he will do very good for himself.”

Saheefa has devoted all her time to Ashraful. The little boy doesn’t want to communicate with anyone else, apart from his family. Saheefa and Sarfaraz have stopped going out. All they want is to make their child be able to hear and speak. They want a normal life for their child.

“It has been almost 5 years now that we haven’t celebrated Eid. I have promised myself that I will celebrate any festival only when my child gets the life he deserves. I would have given up if there was no hope of his betterment. But he can get better only if I can afford the surgery.”

Lack of money has already delayed Ashraful’s treatment so far

Sarfaraz makes purses in Tapsia, Kolkata. He doesn’t get work all around the year. The months in which he gets work, he manages to earn Rs 8000. He tries to save as much as possible in those months. If he runs out of money, he has to go about borrowing from his neighbors. In this situation, it is impossible for him to arrange Rs 7.7 lakhs now.

“I have already spent a few lakhs so far. My poverty has only delayed his treatment. I couldn’t get his hearing aid sooner, I couldn’t start his speech therapy sooner. My relatives stay far and I have never really been able to get help from them. It will take me ages to gather such huge amounts of money. If I fail to get money for his surgery soon, he will remain deaf and dumb for his entire life. I don’t want his life to come to a standstill.”

8-year-old Ashraful was born deaf and dumb. Hearing aid and speech therapy haven’t made much difference to his condition. Only a cochlear implant surgery can help him speak and hear, but his father can't afford the expense.

Your support will help this child hear and speak for the first time. 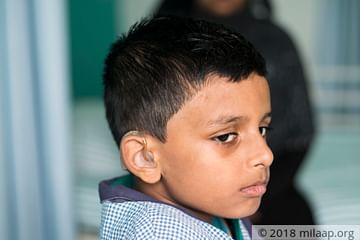 Hearing aid and speech therapy hasn't made much difference for Ashraful. He needs an urgent surgery.