After A Severe Cardiac Arrest, This Teenager Is Now Fighting For His Life On Ventilator Support | Milaap
loans added to your basket
Total : 0
Pay Now

After A Severe Cardiac Arrest, This Teenager Is Now Fighting For His Life On Ventilator Support

Shares
Shares
Share on whatsapp
It was late evening when Haji Sayyid, father of 13-year-old Rehan found out that his son is running a very high temperature and was also having trouble breathing. The local hospital is not very far from their place but with Rehan’s condition, walking was clearly not an option. Unfortunately, no autos were available at that time and he had to ask his son-in-law to come with his motorcycle. Once in the bike, Haji kept on checking on Rehan, continued making a conversation with him to keep him distracted.

“Even when we reached the hospital, he held my hands and nodded at what I said. But once they put him on the stretcher to admit him, his hands just slipped from my grip - his eyes were shut and he stopped talking. I got very scared. I watched helplessly as the doctors and nurses ran around making arrangements for Rehan. I saw them placing a machine on my son’s chest. As they switched it on, Rehan’s body shook with the jolt of electricity but he didn’t open his eyes. The second time they repeated the process, he woke up gasping for breath. I saw that and clutched the armrest of a nearby bench and sat down with a thud. My son was alive but still not out of danger - I didn’t know what to do to bring him home safe.” - Haji.

As Rehan fights for his life in the hospital, his father can’t help blame himself for scolding his son on the fateful day

After suffering a severe cardiac arrest, Rehan has now been diagnosed with bilateral pneumonia and septicemia or blood infection. Both his lungs are affected by pneumonia and he has severe difficulty in breathing. The doctors have said that he needs to stay in the hospital in ventilator support for at least a week to recover fully.

“As I sit outside the ICU waiting for the doctors to tell me that Rehan is getting better I can’t help but think of the day, just a week back, when all of this started. He had come home in the evening after playing football and I noticed that he was hurt in his legs. Without even asking anything, I got angry with him and asked him to come back home directly after school. He kept quiet and listened to me, little did I know that he is hiding the fact that the football had also hit his chest badly. I end up blaming myself for my son’s sufferings.I wish I was more considerate.”

With no money on himself and huge debts to pay, Haji doesn’t know how he can save his son

Haji is a street hawker who sells clips, hair bands and other small accessories for women on his cart. He earns around Rs 350 per day. He has two older sons (19 and 17) who also do part-time jobs and earn about Rs 200-250 a day. He has already spent around Rs 40,000  borrowing from his relatives and a close friend. He doesn’t know when he can pay them back and his son needs another Rs 4 lakhs to stay in the ICU for a week. There is no way that he can save his son unless he gets help.

An old pic of Rehan

“Rehan has always been an obedient boy. He was diligent in studies as well. He loved going to the masjid nearby and never forgot to read namaaz. I can’t bear to see him like this - I hope Allah listens to our prayers and blesses him with a fast recovery.”

13-year-old Rehan is suffering from pneumonia and is fighting for every breath in the ICU. He needs to stay for a week in the ICU but his poor father is unable to afford the treatment. Your kind contribution can help Rehan get better and go back to books and football - it shall bring back happiness to the lives of the parents.

Your kind support can save this teenager's life 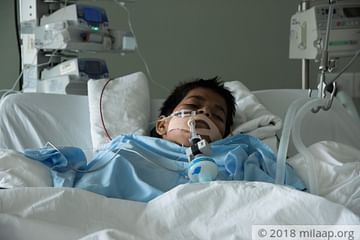 Rehan can't breathe on his own for the last one week. Only an urgent treatment can save his life.

UPI: givetohajipashasayyid@yesbankltd (Copy to clipboard)
Or
Click here to read the instructions before you make a bank transfer.