All He Wants Is To Celebrate Durga Puja But Cancer Stands In the Way Of This 6-Year-Old | Milaap
loans added to your basket
Total : 0
Pay Now

Shares
Shares
Share on whatsapp
Durga Pujas (celebration of Goddess Durga)  are almost here and little Om has only one thing to worry about. It’s nothing to do with buying new clothes for him during the festival. It is only about requesting his father to not to take him for chemotherapy during the days of the Pujas. Om's favourite pass time during this time of the year is making note of how the puja pandal (temporary structure for the idol) in his village is growing bigger every day. He loves seeing the craftsmen building the pandal, colouring the idol of the goddess and the entire village getting ready for the grandest festival of the Bengalis. But his father, Sudipta Patra is worried about his son getting worse during this time.

Little Om has been diagnosed with B-cell Acute Lymphatic Leukemia way back in 2014. It is a form of cancer that  affects the white blood cells. It occurs in the bone marrow and can quickly spread to the blood. Since then, Om has been fighting against this deadly cancer.

“In 2014, when we took him to the doctor, Om was in a very bad condition. His stomach had swollen up and was hard as a pumpkin. He complained of a throat pain. The pain in his chest was so severe that he used to pull both his legs close to his chest and cry out in agony. It was an unbearable sight for us.”

The chemotherapy sessions were helping Om to get better. He started recovering and by the start of the 2015, Sudipta and his wife, Mampi took Om back.

“We thought our days of worries were over. We admitted Om to a nursery school and he was very excited. Every morning he used to go to school with his grandfather and while returning he always got himself an ice-cream. We were all so happy when suddenly I noticed something out of normal. Om was complaining of a severe knee pain and his testicles had also enlarged. We took him to the hospital fearing the worst. After some medical tests, the doctors told us that Om has had a relapse. I couldn’t control my tears as the doctors explained what all we had to do for him to get better.”

Sudipta, a primary school teacher, is struggling very hard to arrange for his son’s treatment

Sudipta is a primary school teacher in a small district of West Bengal. He has been single-handedly taking care of his entire family all this while. But with the growing expenses for Om’s treatment, Sudipta is very worried as to how he will manage to get his only son treated.

Despite the cancer, Om loves playing around

“I have borrowed from my near relatives and even gone to the extent of selling the small piece of land that I owned. Even then, I am falling short of the 3 lakhs that I need to get Om treated. I have already spent around 10 lakhs, I don’t know how I will arrange for the money without any help.”

6-year-old Om is battling cancer but he is a resilient little child who has fought back cancer once. This time he needs chemotherapy to carry on his battle against the deadly disease. Your generous contribution can help little Om get a second chance at life and bring the happiness in the lives of Sudipta and Mampi.

Your support can save Om's life 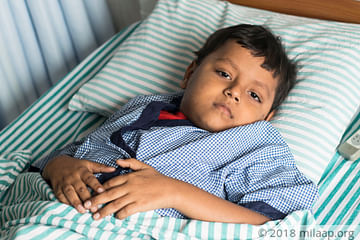 Tired And Weak, This 6-Year-Old Won't Be Able To Celebrate Durga Puja Without Treatment