This 8-year-old Will Bleed From His Nose Until He Dies Without An Urgent Surgery | Milaap
loans added to your basket
Total : 0
Pay Now

“Sometimes, Kushal bleeds from the nose so much that it seems like blood from his entire body will come out. I become so scared at the sight of so much blood. But he sits up and puts ice pack by himself and tells me that he’s going to be fine. When my 8-year-old son is fighting a deadly disease with so much bravery, I am left with no other option but be strong.”

Kushal is learning in spite of all odds

Shivalika and Basavraj have an elder daughter, Kruthika who goes to college and twins who are 8 years of age, Kushal and Khusi. While Khusi has a normal life and is in class 4 now, Kushal has not been able to go to school beyond class 1. Surprisingly, this has in no way hampered his intellect.


“Kushal's body has completely stopped producing new blood. Needless to say, he is too weak to do anything. His disease has not let him live a life like any other child his age. Even without going to school, he understands and can read spellings. At this age, without school, he already knows Kannada, Telugu, Hindi, and English. We sometimes don’t understand what the doctors are saying, but he understands each word. He's so smart. We want to doing good for himself. But he might not even live.”

3 years ago, little Kushal started feeling very weak and had fevers that refused to go away. Doctors asked the parents to have his blood tests done. It revealed a disease the parents had never even heard of, Fanconi anemia. It is a rare genetic blood disorder where the bone marrow is completely damaged, stopping blood production. Even the most minor bleed can be fatal. For Kushal, his bone marrow is damaged and bone marrow transplant is the only way left to save him.


“My son doesn’t look as much sick, but within, we know he is dying with every passing day. He is too weak to play or do anything. His height and weight are normal. But I doubt how long is he even going to be this way without any blood being produced in his body. I am scared that anything can happen to him anyday.”

Kushal has been undergoing blood transfusions for the past 2 years. Although he is one of the strongest kids, he is scared and doesn’t want to go through the pain anymore. The only way Shivalika consoles him is by telling him that this is the only way to go back to school.

Kushal's body cannot protect him without white blood cells. He cannot clot without platelets. His organs will shut down from low oxygen. He needs a new marrow to survive.


“He can’t even sleep when his nose is bleeding. If he lies down, the blood goes to the stomach and he ends up throwing up. I avoid crying in front of him. His strength gives me the strength to fight our situation without complaining. But how long?”

Basavraj is a farmer and gets work only in few seasons. The family somehow manages to earn the bare minimum for sustenance. But the cost of education is already there. They don't even have a regular income. Basavraj and Shivalika can’t manage the expenses anymore.

Kushal’s body has no blood and Fanconi anemia is killing him slowly. The cost of bone marrow transplant which is the only way to save him is Rs 35 lakhs and the family has no money left.

“We have to take him to the hospital every 20 days and we end up spending Rs 20,000 to 30,000 every time. We have already spent Rs 5 lakhs and had to borrow most of it. We don’t even have the money to repay back. Kushal has barely lived, we have to save him.”

Your contribution can stop Kushal from bleeding to death. 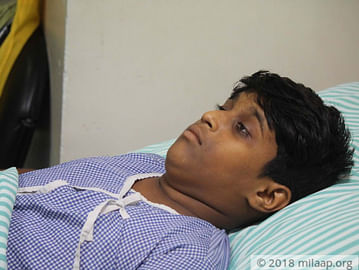 Kushal's Body Is Not Making Any Blood, So The More He Loses The Closer He Is To Death

Kushal is suffering from bone marrow failure. He needs a new one to survive.